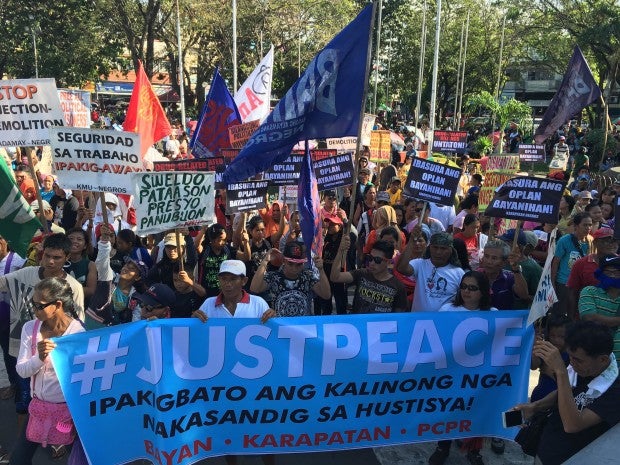 About 1,500 protesters call for peace and justice for victims of the Marcos dictatorship during a Human Rights Day rally at the Bacolod public plaza on Dec. 10. CONTRIBUTED PHOTO

Protesters led by the Bagong Alyasang Makabayan and Capiz Environmental Protection Alliance converged at the Roxas City bandstand where a program was held. In the morning, a 40-vehicle protest caravan against mining activities passed around towns in the province.

About 1,000 protesters in Estancia town, Iloilo marched along the main streets and later burned a mock figure of Marcos. The protesters, many of whom were survivors of the Nov. 8, 2013, Supertyphoon “Yolanda,” also demanded the release of assistance for those affected by a massive oil spill during the supertyphoon.

In Iloilo City, about 2,000 protesters attended Mass and a program organized by the Marcos No Hero Movement-Panay and the human rights group Karapatan at the Freedom Grandstand.

The activity was joined by martial law survivors, students, religious groups and professionals.

They later marched to the grounds of the provincial capitol where the activity ended.

In Bacolod City, about 1,500 protesters joined a Human Rights Day rally at the Bacolod public plaza, calling for peace and justice for the victims of the Marcos dictatorship.

The Concerned Citizens of Negros (CCN) also held a torch parade and rally organized by the groups Block Marcos and IDefend in the evening.

Lawyer Andrea Si of CCN said the burial of Marcos at the Libingan ng mga Bayani was not just the burial of his remains but an attempt to bury the truth about the gruesome atrocities during his regime.

“The Marcos’ administration imprisoned 70,000 of his critics, killed 3,000 Filipinos and tortured 35,000 others, all to perpetuate his hold on power,” a CCN statement said.

“The attempt to blur the evils of martial law occurs at a time of rampant extrajudicial killings, threats to suspend the writ of habeas corpus, exclusion from the Cabinet of known oppositionists, sinister Congressional initiative to amend the 1987 People Power Constitution, and subservience of the Supreme Court and the legislature, coequal branches that are supposed to check and balance the power of the president,” according to the statement.

In the capital town of Kalibo in Aklan, about 1,500 protesters assembled at the Kalibo-Numancia bridge before marching to the Pastrana Park where a program was held.

Among those that joined the protest of Rise Up Aklan and Bayan was the group Dekada 80, composed of those who were part of the resistance against the Marcos dictatorship.

“Marcos’ burial at the Libingan ng mga Bayani is a grave crime against the historical and victorious struggle of the people against martial law,” said Franklin Quimpo of Dekada 80.

In Cebu, two protesters wearing masks of Marcos and his wife Imelda led about 100 militants in marching to Fuente Osmeña rotunda on Saturday afternoon.

“Imelda” was carrying a baby who wore a face mask of President Rodrigo Duterte.

Teody Navea, secretary general of Sanlakas Cebu, said Duterte was shaping out to be like a dictator.

“We would like to challenge Duterte to eliminate drugs in the country but there should be no human rights being violated,” Navea said.

Read Next
De Lima: DILG findings on EJKs ‘an insult’
EDITORS' PICK
COVID-19 has infected more than 69,000 people globally
Xi’s early involvement in virus outbreak raises questions
The Najima Drive: Nissan’s MD drives #GoAnywhere adventures in new video series
Can Your Brand of Meat Be Trusted? Here’s How to Know You’re Eating Safe Meat
COVID-19 screening checkpoints remain for those going to Boracay
Can travel make you fall in love?
MOST READ
2,000 iPhones given for free by Japanese gov’t to passengers stuck on ship due to coronavirus
WATCH: Sarah Geronimo dances ‘fierce’ version of ‘Tala’
COVID-19 has infected more than 69,000 people globally
NBA loses ‘hundreds of millions’ in China over Hong Kong tweet
Don't miss out on the latest news and information.