Colombia president to collect Nobel without rebels in tow 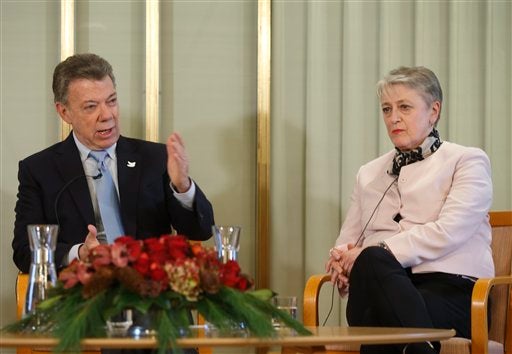 OSLO, Norway — Colombian President Juan Manuel Santos says he has brought no members of the leftist FARC rebel group to Oslo for the Nobel Peace Prize ceremony because he doesn’t want to “create problems” for the Norwegian government.

Santos told reporters Friday that the rebels, with whom he recently reached a peace agreement, “will be here in heart and spirit.”

He said a Spanish lawyer that served as a chief negotiator for FARC would represent the rebels at the ceremony on Saturday.

Santos won the Nobel Peace Prize for his efforts to end a conflict which has lasted decades and left more than 200,000 dead. The prize went to him alone and not the FARC, which is still designated as a terrorist group by many countries including the U.S. TVJ