Duterte to foes:  Go ahead, impeach me 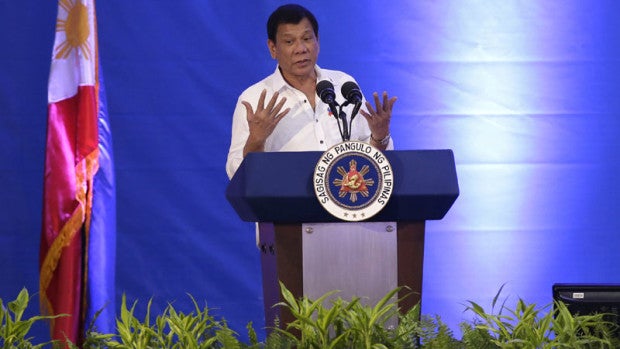 DARAGA, Albay — President Duterte said on Thursday he was not troubled by threats from the opposition to impeach him.

When asked for his reaction to Sen. Antonio Trillanes’ accusation that he masterminded the killing of detained drug trafficking suspect Mayor Rolando Espinosa Sr., Duterte said, “He is entitled to his opinion. This is a democracy, di ko nga pinansin yan (I just ignore him), don’t pay attention to it.”

The President also challenged Sen. Leila de Lima to file an impeachment case against him for declaring that the policemen involved in the Espinosa killing would not go to jail.

“Well they can go ahead, wala ng maraming daldal sige na impeach na (stop the talking, go ahead, impeach me),” he said.

“I have to answer to satisfy their lust for whatever. Hayaan mo sila (Let them), sige impeach, go ahead.

Duterte was also firm that he would not allow corruption in his administration and promised to end narco-politics and drug trafficking in the country.

On another issue, President Duterte said he would release the 130 political prisoners at the right time during the peace process with the National Democratic Front of the Philippines, the negotiating arm of the Communist Party of the Philippines and the New People’s Army, and would prioritize the old and sick among the detainees.  SFM/rga