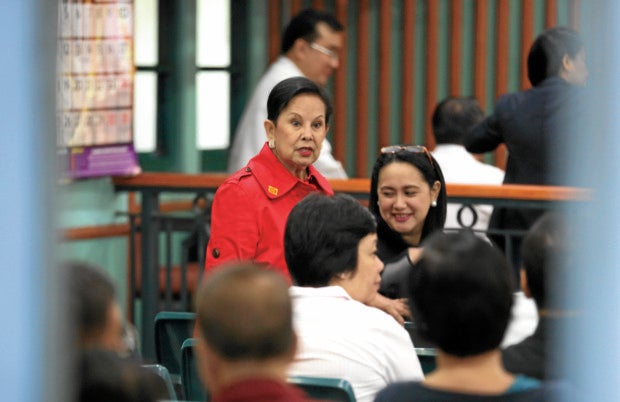 State prosecutors have appealed the Sandiganbayan Fourth Division’s acquittal of former Makati Mayor Elenita Binay, saying the court had violated the People of the Philippines’ right to due process.

In a 10-page motion for reconsideration filed on Monday, the Ombudsman’s Office of the Special Prosecutor said the antigraft court “committed grave abuse” when it cleared Binay and two others of graft over the purchase of allegedly overpriced city hall furniture worth P13.25 million while skipping public bidding.

Instead of holding a new round of bidding, the city made the December 1999 purchase through a “repeat order” of a September 1999 transaction won by Office Gallery International Inc.

Since the separate but related graft case involving the September purchase order was still pending before the Fifth Division, the Fourth Division said it could not preempt that judgment by declaring the December repeat order invalid.

But prosecutors said the Fourth Division violated the State’s right because it did not consider the evidence on record formally offered during the course of trial.

Evidence that supposedly show procurement irregularities includes a letter of award dated two days before bidding on the first purchase order was actually conducted on Sept. 17, 1999.

Also presented were bid proposals by various suppliers all dated Aug. 16, 2001, and bearing the same quantities and specifications despite the absence of a furniture layout plan.

The appeal also assailed the court’s refusal to rule on the validity of the repeat order “although it has the jurisdiction to do so.”

Prosecutors cited Section 34, Rule 132 of the Rules of Court, which provides that “the court shall consider no evidence which has not been formally offered.”

The appeal questioned why the court would have

to rely on the Fifth Division case when both the prosecution and the defense presented “utterly no evidence” related to it.

“With due respect, the Court appears to rely solely on the findings of the Fifth Division on this matter,” the motion read.

Since the decision was supposedly tainted with grave abuse of discretion, prosecutors argued that this marks an exception from the general rule barring appeals against acquittals.

The assailed decision marked the first time Binay was acquitted by way of a full-blown trial.