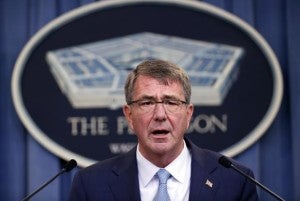 In this June 30, 2016 file photo, Defense Secretary Ash Carter speaks during a news conference at the Pentagon. The IS has called on its followers to attack US bases in Bahrain, which Carter is scheduled to visit. (Photo by ALEX BRANDON/AP)

DUBAI, United Arab Emirates — The Islamic State group is calling on its followers to launch attacks in Bahrain, including those targeting American military personnel stationed on the tiny island ahead of a visit by the US defense secretary.

The appeal for violence came in a video that also urges militants to attack the Sunni-ruled island’s Shiite majority amid a wider government crackdown on dissent there.

The slickly produced video surfaced as IS propaganda has waned as the extremists continue to lose territory in Iraq and Syria under the onslaught of a US-led coalition campaign against them. Bahrain is part of that coalition.

In the IS video, images of Bahraini fighter jets are juxtaposed to footage of an airstrike hitting an IS-held area. It also shows clips of a Bahrain-based Gulf Air flight, the King Fahd Causeway linking the island to Saudi Arabia and other sites in the capital, Manama.

“Wherever the enemies of Allah are found, there is jihad. Below you are the malevolent (Shiites) and the apostate soldiers of tyranny,” one fighter says, according to a transcript provided by the US jihadi-monitoring SITE Intelligence Group.

“The muzzles of your weapons should not miss those American bases where from military aircraft took off to pour their flames on the monotheists in the territories of Islam,” the militant adds.

Bahrain is home to the US Navy’s 5th Fleet, as well as a British naval base still under construction. Officials with the 5th Fleet did not immediately respond to a request for comment.

In a statement to The Associated Press on Thursday, Bahrain’s government said it “remains vigilant against terrorist activities and extremism.”

“Authorities continue to take all necessary steps to preserve security and stability within the kingdom,” it read.

The video appeared timed for high-level meetings on the island.

This coming weekend, Bahrain will host the Manama Dialogue, where US Defense Secretary Ash Carter is scheduled to give the opening address. British Foreign Secretary Boris Johnson is also due to attend.

Perhaps more troubling in the video to Bahrainis is the list of 14 purported fighters from the island who the Islamic State group says died as suicide bombers or fighters in Iraq and Syria. One of their names is similar to a man the government identified in January 2015 as having his citizenship stripped for belonging to the militant group. Bahrain also prosecuted a group of people last year it accused of forming a local Islamic State cell.

The video, like others from the extremists, seeks to cleave Sunnis from Shiites — something that’s particularly worrying in Bahrain.

It’s been five years since Bahrain’s 2011 Arab Spring protests, which saw Shiites and others demand more political freedoms from the ruling Al Khalifa family. The government put down the demonstrations with help from Saudi and Emirati troops, and later pledged to carry out reforms.

In the time since, sectarianism has grown on the island and the Sunni-dominated government is in the midst of a crackdown on unrest at a level unseen since 2011.

Authorities have suspended the country’s largest Shiite opposition group, Al-Wefaq, and doubled a prison sentence for its secretary-general. Human rights activists, Shiite leaders and others have been imprisoned, lost their citizenship or forced into exile.

Bahrain’s government meanwhile has insisted that no one “will, or can be, prosecuted for his or her political views.”

“The government is fully committed to community cohesion and upholding the principles of reconciliation and tolerance, and will not allow the disruption of that cohesion and peace to go unchecked,” the government’s statement also said.