Robredo: I’m not a minion of LP 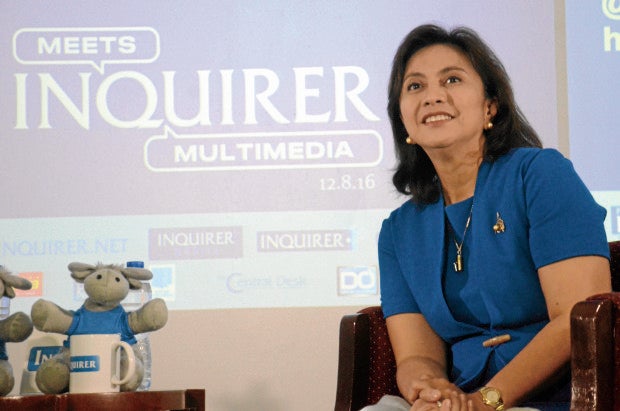 Vice President Leni Robredo listens as she is being asked a question at the Meet Inquirer Multimedia forum on Dec. 8 at the Inquirer offices in Makati City. ARNOLD ALMACEN/PHILIPPINE DAILY INQUIRER

Vice President Leni Robredo on Thursday cried foul over accusations she was merely a lapdog of the erstwhile ruling Liberal Party (LP).

During the Meet Inquirer Multimedia forum with Inquirer editors and reporters on Thursday, Robredo said ever since she was a legislator for her hometown Camarines Sur, she was able to prove that she could work independently, without any influence from her party.

Robredo explained: “To claim that I’m a minion of LP, I think that’s unfair because my record hasn’t shown any indication to that sort na sunud-sunuran (that I just mindlessly follow orders). That’s an unfair accusation.”

Robredo, who ran with LP standard-bearer former Interior Secretary Mar Roxas during the May elections, even pointed out that the party significantly lost members when President Rodrigo Duterte took office.

In the House of Representatives, Robredo said the LP started with 114 members but they had since been reduced to 32.

The Vice President also noted that being the face of opposition was a “very daunting” task for her because the public had already attached a stigma to LP, which was then backed by the administration of former President Benigno Aquino III.

“There’s already a stigma that has been assigned to it by so many people also because I think some of the things said during the campaign really stuck,” Robredo said.

“When they say ‘dilawan kasi ’yan (their color is yellow),’ it turns off so many people,” she added, referring to the chosen political color of the Liberal Party.

But Robredo maintained that she had no plans of leaving LP, mainly because her late husband, former Interior Secretary Jesse Robredo, belonged to the party.

“I intend to stay but the challenge really is how to continue being a part of LP and removing that stigma,” she said.