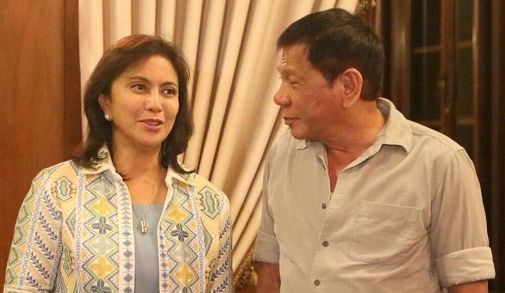 From President Duterte to Vice President Leni Robredo, an assurance she won’t be ousted from office.

President Rodrigo Duterte on Thursday assured Vice President Ma. Leonor “Leni” Robredo that she will retain her post until the last day of her term.

Duterte made the statement when asked about a supposed plot to steal the vice presidency from Robredo.

“I will assure Leni and the rest of the Bicol region that you will have her until the very end of her term. There is no such thing as removing a vice president,” he said in an ambush interview during the groundbreaking ceremony of the Bicol International Airport in Legazpi City.

Robredo earlier said that an alleged conspiracy to take the vice presidency from her is “being set into motion.”

“I will not allow the Vice Presidency to be stolen,” she said after stepping down as the chair of the Housing and Urban Development Coordinating Council (HUDCC).

In an event in October with the Filipino community in China, Duterte suggested that the late dictator’s son and namesake, former Sen. Ferdinand “Bongbong” Marcos Jr., could be the new vice president if he wins his electoral protest against Robredo.

Asked about his “irreconcilable differences” with Robredo, Duterte clarified that he doesn’t have a fight with her.

“Wala kaming away ni Leni ngayon (We have no quarrel) but you know she has always been consistent about the U.S. interests na gusto niya magbalik kasi you will lose the aid, and the protestations of State Department and Obama,” he said.

Robredo has been barred from attending all Cabinet meetings, which prompted her to resign as HUDCC chair and the Duterte Cabinet.

Malacañang said the “desist” order for Robredo was due to her irreconcilable differences with the President. JE/rga/ac

READ: Duterte: Bongbong Marcos could be our new VP