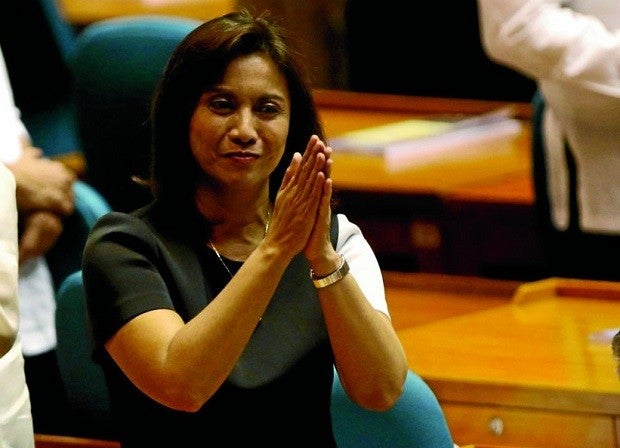 Vice President Leni Robredo has expressed dismay over the swift approval by the House committee on justice of a bill seeking to reinstate capital punishment in the country, saying it was done apparently to please President Duterte.

“The news that the re-imposition of the death penalty has been approved on the House committee level is worrying. It appears that it was done in haste only to grant what the President wants,” Robredo said in a statement released in Filipino.

President Duterte has repeatedly said that the death penalty is an integral part of his war on illegal drugs, the main  issue he has focused on since assuming office almost six months ago.

To date, nearly 6,000 suspected drug pushers and users have been killed nationwide in a crackdown that began soon after Mr. Duterte was elected President in May.

“We are hopeful that the hurried [approval of the bill] will not happen at the plenary in Congress. We still believe that the idea of a democratic legislative body will still prevail; that in passing the law, it is the good of the majority that will be taken into consideration and not just to say yes to the command or the desire of just one person,” Robredo said.

“The questions of congressmen who opposed [this bill] were not sufficiently answered,” said Robredo.

Robredo said the death penalty had not been proven effective in deterring crime and that there was no need to revive it.

Robredo questioned how a bill could pass without enough evidence or studies to show that the death penalty had stopped the commission of crime.

“The questions of congressmen who opposed [this bill] were not sufficiently answered,” said Robredo, who was a lawmaker for three years before becoming Vice President.

Robredo also pointed out that it seemed some members of the committee on justice “forgot” that the Philippines was a signatory to the Second Optional Protocol to the International Covenant on Civil and Political Rights (ICCPR), which prohibits the restoration of the death penalty. CBB/rga