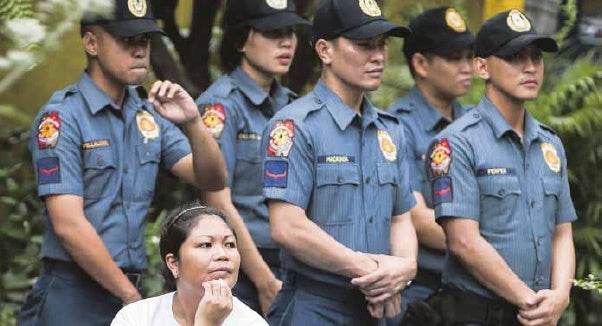 The killers of Albuera Mayor Rolando Espinosa Sr. won’t spend a single day behind bars, President Duterte declared on Wednesday, in a move that may encourage more extrajudicial killings in his brutal war on drugs.

The National Bureau of Investigation has filed murder complaints against two dozen policemen after a probe showed they shot to death a helpless Espinosa in his cell and another inmate in a raid on a Leyte prison early on Nov. 5.

The investigation also showed there was no gunfight between Espinosa and the policemen, contrary to the claim of the accused officers.

Speaking at the Urban Poor Solidarity Week celebration in Mandaluyong City on Wednesday, Mr. Duterte brushed aside the NBI findings.

“I will not allow these guys to go to prison. I don’t care if the NBI says it’s murder. Anyway, the NBI and the Department of Justice (DOJ) are both under [my authority],” Mr. Duterte said.

“I will be the one to answer for it and go to prison. I have no problem with that. When I was young, I went in and out of prison. I’m used to it,” he said.

The NBI is the DOJ’s investigative arm. It filed the complaints in the DOJ on Friday, and DOJ prosecutors will determine whether there is probable cause to indict the policemen.

As in his previous speeches, the President appeared to contradict himself when he said he was not trying to influence the NBI’s investigation of Espinosa’s killing, which had also prompted a Senate investigation led by Sen. Panfilo Lacson.

After hearing testimony from the accused policemen, Lacson, a former chief of the Philippine National Police, said Espinosa’s killing appeared to have been “premeditated.”

Mr. Duterte said: “I do not interfere. They have a finding. Good. Then you file a case. But I will not abandon these policemen because it was my order. ‘Sir, you told us to arrest [the drug suspects], but when they resist [we should shoot them].’”

He added: “For us mayors, who will we believe? The policemen or [the] criminals? If the police said that’s really the truth, but the NBI said it was murder, what the police told me is the truth for me.”

Mr. Duterte’s statement was  a clear rejection of the results of the NBI investigation, which belied the claim of Supt. Marvin Marcos, chief of the PNP Criminal Investigation and Detection Group (CIDG) in Eastern Visayas, and his men that Espinosa was slain in a shootout.

It also came amid international and local outrage over the spiraling drug-related killings in the Philippines, which have  reached nearly 6,000 since Mr. Duterte launched his brutal crackdown on narcotics after taking office on June 30.

Espinosa had surrendered to Dela Rosa in a nationally televised event after he and more than 160 other officials were publicly linked to illegal drugs by Mr. Duterte in August as part of a shame campaign.

Espinosa was later released, but was arrested and jailed in October after being indicted on drug and firearm charges.

Around 3:30 a.m. on Nov. 5, officers from Marcos’ command raided Espinosa’s cell in the Leyte subprovincial jail in Baybay City supposedly to execute a search warrant for weapons and drugs.

The police claimed Espinosa fired on the officers as they entered the cell, prompting them to shoot back, killing the mayor.

Another inmate, Raul Yap, was also killed in an exchange of fire with officers.

But the NBI investigation showed Espinosa and Yap were not armed and their supposed guns were fired toward a wall, away from the gates of the cells where the policemen entered, contradicting the officers’ claim of a shootout.

Other prisoners testified that someone accompanying the police entered Espinosa’s cell with a pistol and walked out later without the gun, the NBI said.

In his usual profanity-laced speech, Mr. Duterte reiterated that his war on drugs would continue until his last day in Malacañang.

“Look, let’s be frank even with these police officers. I do not obstruct. The finding of the NBI was it was murder. So I tell them I believe [the version] of the police,” he said.

“The policemen said, ‘Sir, (Espinosa) really fought it out.’ Then I will believe the police,” he said. “Now, why will I sacrifice the policemen? And there is one lousy soul, a son of a bitch, who you want to favor?”

Asked for comment on Mr. Duterte’s statement about Marcos and his men, Senator Lacson said he wanted to hear first a clarification from the President’s press officers.

“I’d rather wait for the spokespersons to clarify the statement, regardless if what he said was clear, because he also had a caveat when he said, ‘I still believe the version of the police. I don’t want them to go to jail,’” Lacson said. —WITH REPORTS FROM LEILA B. SALAVERRIA AND AP