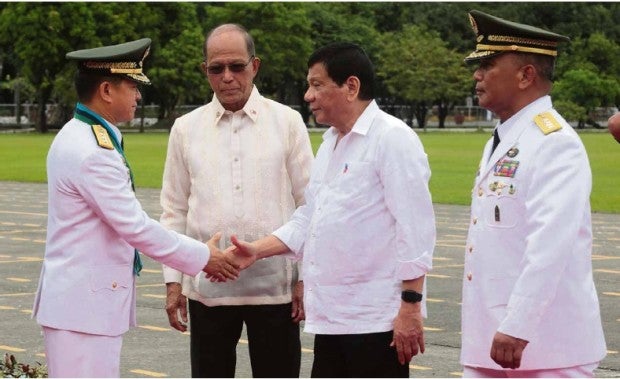 Lt. Gen. Eduardo Año, who has an extensive background in military intelligence and who led counterinsurgency operations, is the new chief of staff of the Armed Forces of the Philippines.

His promotion drew objections from groups that accused him of human rights violations, including the disappearance of activist Jonas Burgos, son of the late press freedom fighter Jose Burgos.

President Duterte picked Año to replace Gen. Ricardo Visaya, who retired on Wednesday. Año will serve for 10 months before reaching the mandatory retirement age of 56.

He earlier vowed to end insurgency in the country and was at the helm of the Isafp during the arrest of top communist leaders Wilma and Benito Tiamzon.

Mr. Duterte has since released the Tiamzon couple so that they can take part in peace talks with the government.

Año had also been linked to the disappearance of Burgos, who was seized from a Quezon City mall in 2007 and has not been seen since. He headed the Army’s intelligence division when the incident took place.

The Commission on Human Rights (CHR), which investigated Burgos’ disappearance on a Supreme Court directive, found that an Army officer was behind the activist’s abduction.

The CHR had talked to witnesses who identified 1st Lt. Harry Baliaga Jr., who was then with the Army’s 56th Infantry Battalion, as the person involved in the incident.

Baliaga was subsequently charged with arbitrary detention before the court, but a similar complaint against Año and several other military officials had been dismissed by the Department of Justice.

Despite being linked to  Burgos’ disappearance, Año had been given promotions. Burgos’ family had opposed Año’s promotions, but this did

not stop his ascent up the military ladder.

A member of the Philippine Military Academy Matikas Class of 1983, he studied at the US Army Intelligence Center and School in 1993 and the Israel Counter Terrorism Center in 2002.

Speaking during the AFP change of command ceremony in Camp Aguinaldo, Año vowed to crush all forms of terrorism in the country, enhance the interoperability of the major services through joint operations, establish a credible defense posture and assist the Philippine National Police in its war against illegal drugs.

He thanked Mr. Duterte and Defense Secretary Delfin Lorenzana, who were both guests of honor during the ceremony.

Año said the AFP was mandated to protect the sovereignty and integrity of the country’s territory, thus he would push forward the modernization of internal security and territorial defense capabilities.

Año said that while soldiers were trained to fight in war, they should also fight for peace and support the government’s initiative for a peaceful resolution to armed conflict.

Malacañang said Año’s appointment as AFP chief of staff came at an “opportune time,” when the administration is pursuing peace with rebel groups.

“The Philippines is now on the cusp of winning the peace as the Duterte administration is determined to pursue political negotiations with various rebel groups. As we secure lasting peace, we remain on guard to keep terrorism at bay,” Presidential Communications Secretary Martin Andanar said in a statement.

But others are not impressed. Makabayan lawmakers reacted with “horror and rage” over Año’s promotion.

“Año’s appointment despite his bloody human rights record on top of the continued implementation of Oplan Bayanihan, the nonrelease of political prisoners, extrajudicial killings and the recent committee approval of proposals to revive the death penalty make a very terrifying combination,” she said.