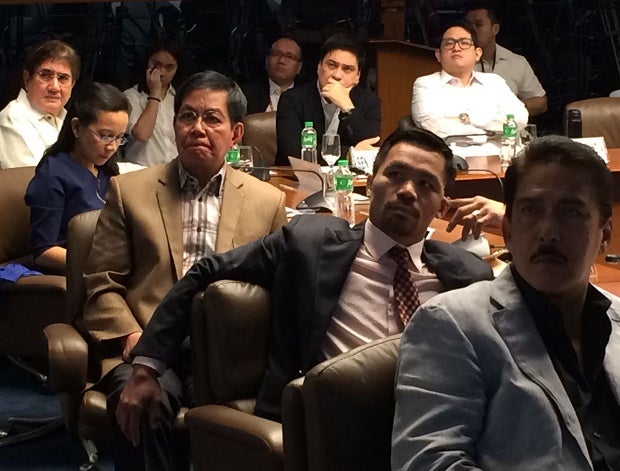 MANILA — If policemen violate the law, they must be punished.

This was among the points raised and addressed specifically to President Duterte by the committee report penned by two Senate bodies that probed allegations of extrajudicial killings in the ongoing government war on drugs.

While the Senate committees on justice and human rights and on public order and dangerous drugs concluded that there was no proof of a state-sponsored policy to kill suspects in the war against drugs, it expressed concern over the “thousands of killings with impunity” that happened not only in the last five months under the Duterte administration but in the last two decades.

A part of the 120-page committee report — only a copy of the executive summary was released to the media Wednesday night — took to task President Duterte’s blunt statements that seemingly encouraged killings and cautioned him on public statements that could be misconstrued as state policies and appeared to condone human rights violations.

“The President must be mindful of his role as head of State and be careful of his words lest they be misconstrued as policies of the State. There may also be accusations of tolerance hurled against him because of the overwhelming support he gives to the police, manifested by his colorful language against drug pushers, which may be perceived as a condonation of the violations of human rights and due process, that the police are committing, in the guise of putting an end to the drug menace,” the executive summary said.

It cited the need for due process to be observed and said the accused “deserve their day in court to prove their innocence.”

The report urged President Dutere to “not just account for the misdeeds of police but also raise their standards of accountability so that they become paragons of protectors of the people.”

“When the police violate the law, they must be punished,” it said.

The report reminded the President of the doctrine of command responsibility. This requires him to “prevent the commission of an illegal act or an irresponsible omission, and to punish the perpetrator.”

It said that if erring police were uncorrected or unpunished, they “may believe that they are above the law.”

This would result in more killings to “silence” suspected drug lords and drug pushers, the report warned.

Drug pushers and dealers would fight back without resorting to legal processes and all this would result in “public disorder and the waning respect for the rule of law, the report said.

“The war against illegal drugs must be won within the legal system, and the President must lead in reminding the people of this important message,” it said.

The “word of caution” extended to President Duterte by the committee report coincidentally came as the Chief Executive defended police officers who were charged with multiple murder for the Nov. 5 killing of Albuera, Leyte Mayor Rolando Espinosa Sr.

Mr. Duterte said on Tuesday he would not abandon Supt. Marvin Marcos and his men even if the National Bureau of Investigation had concluded that the police operations against Espinosa was a rubout and not a shootout.

The two committees are led by Senators Richard Gordon and Panfilo Lacson.  SFM