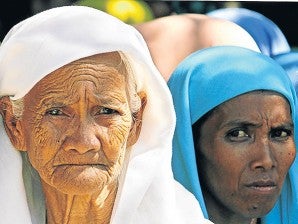 ANXIETY WRITTEN ON THEIR FACES. Muslim women who are among the thousands displaced by renewed clashes between government troops and Moro rebels wait for relief goods at an evacuation center in Barangay Naga-naga, Alicia town in Zamboanga Sibugay. RAFFY LERMA

Both the hawks and the doves in the Cabinet agreed that it was the way to go, but it was the advertising guy who got it sold.

Tourism Secretary Ramon Jimenez is being credited for coining “all-out justice,” the phrase that President Aquino is using to put a tag on the strategy of identifying and pursuing the criminals living among Moro rebels in Mindanao.

“It clarified what we intended to do,” Secretary Ramon Carandang, head of Malacañang’s communications development and strategic planning office, said of President Aquino’s speech on all-out justice on Oct. 24. “Until then there had been no clear statement on what we intend to do.”

Prior to that speech, people thought the government would not go after the killers of some of its elite troops, Carandang said.

“The President said no to all-out war. That led some people to think we’d just let them be. Which was not the President’s intention,” he said.

Carandang said the term was coined during a meeting of Cabinet officials on the very morning that Mr. Aquino was to deliver his statement on one of his decisions that received heavy criticism from the media.

“I wrote a draft based on the discussions Sunday night. I then met with the people in the Cabinet who were there [on Monday morning]… Then we went over the draft,” Carandang said.

He named Executive Secretary Paquito Ochoa, Lt. Gen. Eduardo Oban, the Armed Forces chief of staff, PNP Director General Nicanor Bartolome, Secretaries Ronald Llamas and Teresita Deles, the President’s advisers on political affairs and on the peace process, respectively, and Jimenez as among those who went over the statement.

“In and out of meetings, President Aquino would drop in. He was very hands-on in crafting the statement,” Carandang said.

Asked whether it was Jimenez, a former advertising executive, who came up with the term “all-out justice,” Carandang said: “Yes.”

Not just a slogan

Asked to comment, Llamas agreed that the phrase gave the public, especially the families of the slain soldiers, something to hold on to aside from all-out war.

“It’s not just a slogan. It’s a more comprehensive approach to a historical, structural and more complicated problem of Mindanao, the richest part of the country with the poorest people,” Llamas said.

“It’s more out-of-the-box than the usual knee-jerk reaction of previous governments,” he said.

The phrase also appears to have made it easier for government negotiators to explain the administration’s strategy in pursuing lawless elements while ensuring that the peace process remains in gear.

“Because our President made clear the all-out justice approach, we will pursue law enforcement against criminal elements,” Deles said on Saturday over state radio dzRB.

The President had by then already told the media it would do the country no good to launch an all-out offensive against even the Moro rebels who had been living peacefully, and that the government was already in pursuit of the criminals behind the attacks.

He had also condoled with the families of some of the casualties at their wakes at the Libingan ng mga Bayani.

The agenda: what needed to be done and said.

“You know, there have always been hawks and doves, but in our case, the gap between [them] is almost nonexistent,” Carandang said.

Carandang said it was agreed that there would be a focused offensive against the criminals in Mindanao while maintaining the gains of the peace process.

“The President was very clear. The best possible outcome was to go after the lawless elements but at the same time preserve the peace process. That was really something that was important for everybody,” he said.

Llamas said the policy was “focused on who are the real enemies, which needs a more surgical response rather than all-out chemotherapy, which is sometimes just as destructive as the disease.”

Said Carandang: “We [still] don’t know what’s going to happen down the road.”

“It would be better if there’d be that cooperation, but in one way or another, we’ll get [the criminals]. It’s a firmer stance than in previous years.”