Senate joint panel to Duterte: Observe due process in war vs illegal drugs 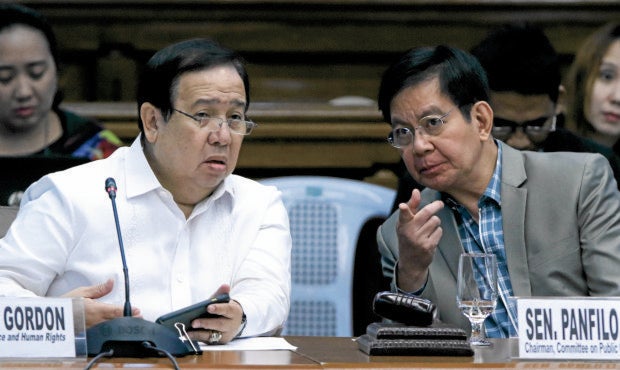 Due process must still be observed while waging war on illegal drugs, a joint panel in the Senate told President Rodrigo Duterte.

“While the people recognize his fearless naming of generals and prominent personalities, including politicians and judges, as protectors of drug lords, due process must still be observed,” the joint panel said in a 19-page executive summary of their findings released to the media on Wednesday night.

“The accused deserve their day in court to prove their innocence,” it said.

The joint panel said the President should not just account for the misdeeds of the police but should also raise their standards of accountability “so that they become paragons of protectors of the people.”

“When the police violate the law, they must be punished. The doctrine of command responsibility obligates the President to take necessary and reasonable measures to prevent the commission of illegal act or irresponsible omission, and to punish the perpetrator.”

“Uncorrected or unpunished even when they have erred, the police may believe that they are above the law,” the summary further reads.

The joint panel said the war against illegal drugs must be won “within the legal system” and that the President must lead in reminding the people of this important message.

“After all, he has sworn as President of the Republic to ‘faithfully  and conscientiously fulfill his duties as President of the Philippines, preserve and defend its Constitution, execute its laws, do justice to every man, and consecrate [himself] to the service of the nation.'”

“Serving the nation entails doing justice to every man, even if he is a drug pusher or a drug lord,” said the summary.

It also advised Duterte to “epitomize a man of the law” and be an “exemplary role model.”

“While there is no doubt that he has the country’s best interest at heart when he waged his war against illegal drugs and criminality,  his ways and methodology may not be readily understood and acceptable to all.”

“He thus should seek to epitomize a man of the law, and be an exemplary role model. All Presidents must be role models in word and in deed. Leaders raise the values and performance of a people,” the executive summary reads.

The President was also advised by the joint panel to be mindful of his role as head of state, be careful with his words and avoid “inappropriate” statements lest they be construed as policies of the State.

The President, it said, might be accused of condoning the violations of human rights and due process allegedly being committed by the police because of his “overwhelming support” for the police and “colorful language” against drug pushers.

“While he has gained the admiration of many for his no-nonsense style, he will further national interest if he bears in mind that he must be not only a force for good but perceived to be so,” the joint panel said.

“Children listen to him. He both has a local and an international audience who scrutinize his every move. He will all the more maintain the trust of the people when he transforms into a leader worthy of emulation, in every sense of the word,” it further said. TVJ
RELATED STORIES

CHR to Duterte: You need human rights allies in war on drugs