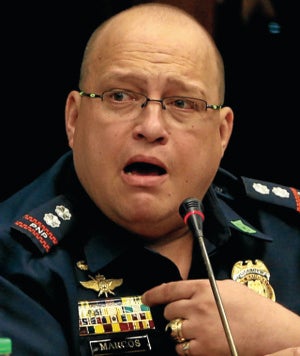 “It’s a rubout. Our findings show there was no shootout between [Albuera, Leyte] Mayor Espinosa and the policemen,” NBI’s spokesman and deputy director Ferdinand Lavin told reporters in a press conference.

In line with this, the NBI, through its Eastern Visayas regional director, Jerry Abiera, recommended the filing of multiple murder charges against Marcos and 23 others from the CIDG and Maritime Unit Operatives.

Operatives of the CIDG-8 killed Espinosa and fellow inmate Raul Yap inside the Leyte sub-provincial jail on November 5. The two reportedly died while fighting off cops who raided their jail cell using two search warrants issued by Judge Tarcelo Sabarre.

Marcos and his men claimed that Espinosa and Yap had shabu in their possession and, despite being in detention, were armed with guns.

In presenting the results of their probe, Lavin said testimonies of witnesses and forensic examination showed that “the killing was premeditated and the victim was defenseless when he was killed.”

“It is patently clear that the acts of CIDG-8 operatives showed a community of purpose or an implied conspiracy. There was unison in their purpose and action, signifying that they were all moved by a single criminal intent,” the 17-page criminal complaint read.

The gun purportedly owned by Espinosa was planted, the NBI said.

Lavin said an inmate who witnessed the killings told the NBI that a police operative wearing hand gloves entered Espinosa’s cell after Chief Inspector Leo Laraga shot the mayor. Laraga was the team leader for the operation.

“When that operative went inside the cell, he was holding a gun. But when he left, there was no gun anymore,” Lavin said.

Trajectory findings also showed that a shootout was “impossible.” Lavin said the bullet holes were seen in two places. The first set of bullet holes was close to where Espinosa died.

The second set of bullet holes was found near the comfort room, far from the direction of his cell door. Lavin said this only debunked claims that Espinosa was shooting Laraga as he was about to search the cell.

The NBI identified Marcos and Laraga’s alleged co-conspirators at the CIDG-8 as:

The recommendation was forwarded to the Department of Justice on Friday afternoon.

The NBI also recommended the filing of charges for violation of Article 129 of the Revised Penal Code against Laraga, Abellanosa and Paul Granados Olendan for the “maliciously obtained” search warrants.

Olendan is also facing a separate perjury complaint for lying before the court in order for the CIDG team to obtain the warrants.

“The search warrant was cover to legitimize their operations [against Espinosa],” Lavin said.

Abiera said the NBI has been looking for Olendan, a former detainee used by CIDG as a court witness in order to obtain the search warrants.

Olendan allegedly told the court that he visited Yap inside the jail on October 28 and saw that Espinosa and Yap had guns and were repacking shabu. Verification with the Leyte National High School, where Olendan was said to be working, showed that Olendan was there the whole day.