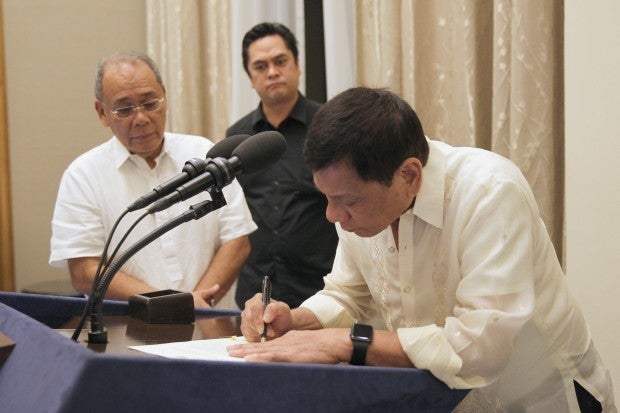 President Rodrigo Duterte has added two more agencies under the Office of the Cabinet Secretary (OCS) through Executive Order (EO) No. 9 released on Tuesday.

The EO signed on December 1 was issued to “enhance the capability of the OCS in order to effectively address and monitor the delivery of the identified targets of the government and to ensure the streamlining and re-engineering of the development thrusts of the Administration.”

Under the EO, the following agencies under its mandate were created:

-the Office of Participatory Governance (OPG)

The OPG “shall promote active citizenship, inclusiveness, transparency, and accountability in governance.”

The STAR Office, meanwhile, is tasked to ensure “timely action and response to the concerns of the public.”

The EO said The STAR Office will strengthen the Presidential Action Center, which is renamed as Presidential Complaint Center (PCC).

The Public Concerns Office (PCO), previously under the Presidential Management Staff (PMS,) will be transferred to the STAR Office.

Aside from PCO, The STAR Office will also supervise the Quick Response Center. The QRC will be President’s direct arm in coordinating concerned agencies to respond to critical incidents, crises, and disasters.

The EO said the OCS will remain as a member of the National Economic and Development Authority (NEDA) Board Executive Committee.

Duterte earlier signed EO No. 1 on July 4, placing 12 national government agencies under the supervision of the OCS. There are:

Presidential Commission on the Urban Poor