IN AN increasingly gloomy world, it may be wise to choose the positive when presented with a myriad of possibilities. So when politicians plunk down considerable amounts of their own fortunes just to run for public office, perhaps it is really because they believe they can make a difference and do a lot of good.

To participate in the May 2016 elections, 32 national candidates forked out a total of P346 million out of their own pockets.

According to the Statement of Contributions and Expenditures (SOCE) submitted by candidates to the Commission on Elections (Comelec), the amounts range from a high of nearly P90 million to a low of about P27,000.

Twenty-six senatorial candidates also said they used their own funds, including international boxing champion Emmanuel ‘Manny’ Pacquiao, who singlehandedly funded his P66.4-million campaign. In fact, aside from Pacquiao, three other senatorial bets used bigger amounts of their own money than Roxas, who among those vying for the highest post in the land took the biggest chunk out of his personal funds to run.

A check on the latest Statement of Assets, Liabilities, and Net Worth (SALN) these 32 candidates filed before May 2016 show that at the very least, most of them have a relatively bigger net worth than the personal money they said they used to campaign in the elections.

Among the exceptions are two former officials of the past administration: ex-Energy Secretary Carlos Jericho L. Petilla and ex-Metro Manila Development Authority (MMDA) Chairman Francis N. Tolentino, both of whom spent more of their own money than billionaire boxer Pacquiao. (See Table)

To be sure, accounting and tax experts note that some of the transactions that are not typically detailed in the SALN are property sales, investment returns, and loans, which are possible sources of funds. But because Tolentino and Petilla both lost in the elections and have not been appointed to new government posts, they no longer have to file newer SALNs that could be compared with their previous ones.

Required in law, the SALN is submitted annually by government officials and employees essentially to prove that they do not use their power in office for personal gain. The SALN, when filled out properly, should reflect the full picture of an official’s wealth. It should include details of his real properties such as a house or lot, personal properties such as cash, jewelry, or vehicles, and liabilities such as loans. The net worth is derived from the total value of real and personal properties less liabilities. Too, the SALN must provide details of an official’s business interests, financial connections, and relatives in government.

The SOCE meanwhile shows how a candidate raised money and how he spent it in the campaign. The SOCE also requires a candidate to specify the expenditures paid through cash and in-kind contributions as well as those paid through personal funds.

The SALN thus becomes a good reference when the SOCE of a candidate who served in public office is being reviewed. The wealth declaration can help verify a candidate’s personal capacity to fund his campaign or donate to another candidate.

Last Oct. 21, Tolentino took PCIJ’s phone call, but he said that he is a “private person.” He then suggested that PCIJ look instead into “drug money.” Petilla, meanwhile, has not responded to PCIJ’s call, text message, and email. (PCIJ used the contact details Tolentino and Petilla supplied in their SOCEs.)

Tolentino, who ran as an independent candidate, declared paying expenses worth P67.2 million out of his personal fund. This amount in addition to cash donations worth P132 million brings his entire campaign kitty to P199 million. This is the biggest amount spent by a candidate in the 2016 senatorial race.

A review of Tolentino’s available SALNs shows that he does not have sufficient cash assets to cover the P67.2 million he himself spent to campaign for senator. His latest SALN on file – December 2014, as MMDA head — shows various “receivables/bank deposits” worth only P12 million. He does have other personal and real properties worth a total of P80 million, but because of a P38.4 million liability, his net worth is at P41.9 million. This has been his average net worth more or less from 2012 to 2014.

PCIJ tried to secure Tolentino’s SALN when he resigned from MMDA in October 2015, but this is not on the file of the Malacañang Records Office, the official repository of the SALNs of executive members. PCIJ also tried to obtain his exit SALN directly from MMDA, but the request was not acted upon.

Accounting expert Benny Gonzalez is careful about making any conclusion based on Tolentino’s submitted documents, noting that he did not study the behavior of the candidate’s wealth declarations in the past. He says that while the available information (as of December 2014) can be used, Tolentino could provide new information that may explain the source of funds he used in the campaign.

Gonzalez says that typically, one has to look at the personal assets first to check one’s “liquidity” or whether a person has quick assets he or she could tap for expenses. If the cash appears to be small, as in the case of Tolentino for instance, other personal assets could also be used to cover expenses. Tolentino’s total personal properties are worth P19.2 million, according to his 2014 SALN.

If the personal assets are still not enough, Gonzalez that says one can assume that a person could have sold his real property if he did not take up a loan.

Speaking in general terms and not to a particular case, Bureau of Internal Revenue Assistant Commissioner for Legal Service Marissa Cabreros remarks that there are many possible sources of funds that could explain where candidates got the money they used for their campaign.

While the “liquidity” or the cash assets of a person is important, Cabreros says that looking at the complete scenario or a person’s entire asset should be considered. She points out, “What if the candidate sold or used an asset as collateral? So those assets — let’s say land – would then be converted to cash.”

Cabreros also says that public officials are required to declare the value of their real assets at acquisition cost in the SALN, which means that a property could have a different value now, possibly higher than the purchase price.

Tolentino has real properties worth P61.2 million at acquisition cost. He declared the current fair market value of these properties at a total of about P85 million.

Unlike Tolentino, Petilla reported a net worth higher than his personal campaign spending. What is curious is that the P86.7-million personal money he used for his campaign came to about 71 percent of his declared wealth. Like Pacquiao, the Liberal Party member said he did not get a single peso from any donor. Petilla’s net worth prior to the May 2016 Elections was P122.1 million, with real properties worth P67.7 million and personal assets worth P63.2 million. 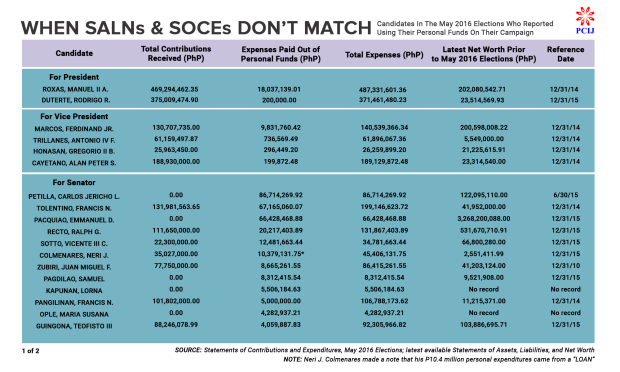 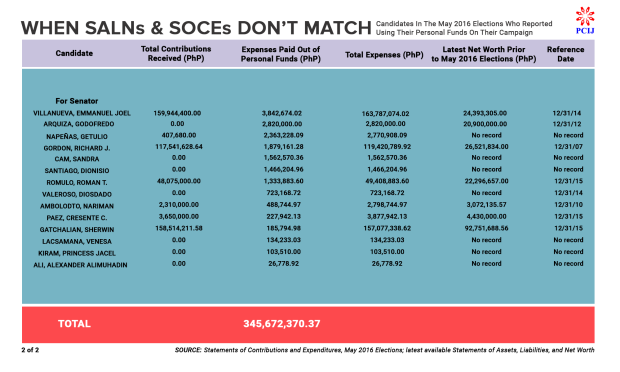 Why bet big to win?

Gonzalez says he does not see any red flag on Petilla’s reporting primarily because there are no guidelines that he knows of that can be used to determine if a candidate has overspent or underspent based on his net worth. Nevertheless, he says that an accountant could ask questions on how a candidate was able to finance his campaign using his own money. In the case of Petilla, Gonzalez says that the candidate would have had to exhaust all of his personal properties and part of his real estate. If he did not have to do that, Gonzalez says, then he must have financed his senatorial bid through another source.

Ultimately, Gonzalez says, much of the curiosity on such numbers will come not from an accountant, but rather from the man on the streets. He says that one possible question that could be raised is this: “He bet 71 percent of his net worth just to win?”

“So it’s not a technical insight,” Gonzalez says, “but a common-sense insight.”

Equally eyebrow-raising perhaps to laymen is former Bayan Muna Representative Neri J. Colmenares’s report, which shows that he paid campaign expenses worth P10.4 million through personal funds. Colmenares’s Statement of Contributions Received, one of the forms included in the SOCE, also states that he donated P500,000 to his campaign. A handwritten note is included in his SOCE, though, saying that the P10.4 million listed is a “LOAN.”

PCIJ sent a letter to Colmenares on October 21 and followed up its request for comment several times. Initially, he said that he had asked his staff to work on PCIJ’s request. On. Nov. 14, Colmenares told PCIJ he will attend to the request after he drafts a motion for reconsideration related to Ferdinand E. Marcos’s burial at the Libingan ng mga Bayani. He also said his “Congress staff has been disbanded” so he would have to go through his files himself in his office. The Center has not heard from Colmenares since.

Gonzalez says that lenders typically consider several things before extending a loan to anyone.  The most important consideration, he says, is the purpose of the loan — where it will be used and the feasibility of whatever it is spent on.

If the purpose is feasible, the lender will also have to check if the person needing the loan could pay it back, Gonzalez says. Moreover, he says, details such as payment period and interest charges would have to be discussed. Similarly, a lender would also have to ask for security or collateral.

BIR’s Cabreros says that a loan can typically be made through a bank, which looks at one’s property or assets as security in case the person is not able to pay afterward.

She says there are also “character loans” in which a lender does not look at one’s asset to decide whether to give the loan but makes the decision to do so because the person is well-known. “So,” she says, “they anchor the loan on the character of the person, not on the asset of the person.” — With research by Floreen Simon, Fern Felix, Vino Lucero, Davinci Maru, and John Gabriel Agcaoili, PCIJ, December 2016