Guilt by picture-taking challenged in Senate 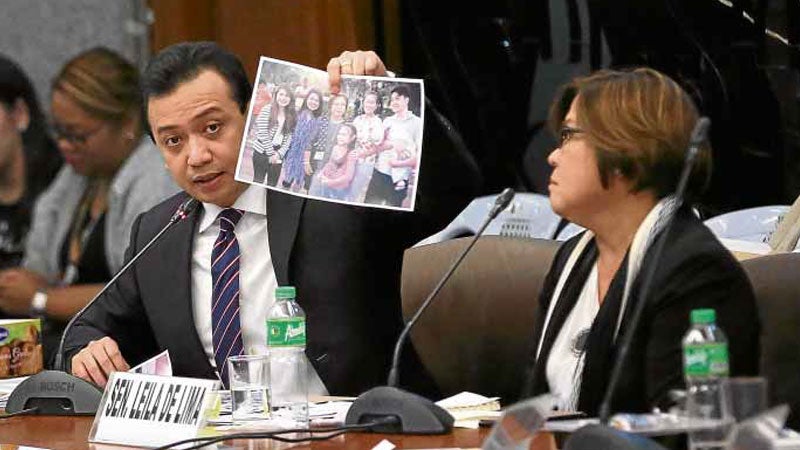 If selfies with drug lords are enough to prove one’s link to the illegal drug trade, then President Duterte is guilty too, according to Sen. Antonio Trillanes IV.

At the resumption yesterday of the Senate inquiry into allegations that Sen. Leila de Lima received drug money, Trillanes presented photos of Mr. Duterte with Cebuano businessman Peter Lim, who has been named by confessed drug distributor Kerwin Espinosa as one of the country’s top drug lords.

“If we are going to [resort] to guilt by picture-taking, then we already caught President Duterte because he is shaking hands with the biggest drug lord,” Trillanes said in making a point that photos of De Lima with Espinosa taken at Burnham Park in Baguio City in November last year should not be used to pin her down.

“So now, are we ready to use pictures as a sign of guilt? If we are going to be consistent, that is the prime suspect,” Trillanes said in referring to the photos of Mr. Duterte and Lim, which appeared to have been taken on two occasions.

He said many would dismiss the pictures of the President with the country’s alleged biggest drug lord as inconsequential, so the photo of De Lima with Espinosa should also be given the same treatment.

The controversial photo was purportedly taken when the confessed drug lord personally met with De Lima at Burnham Park to confirm that Dayan was indeed giving her the cash he was giving as “protection money.”

Sen. Panfilo Lacson, the head of the Senate public order and dangerous drugs committee, argued that the photos were two different cases because of the testimonies of Espinosa and Ronnie Dayan against De Lima. Dayan is a former bodyguard, driver and lover of De Lima.

“This is just an addendum … the difference between the two photos is that Espinosa has a statement under oath and Dayan also has a statement that corroborates that someone is receiving money,” Lacson said.

He said Mr. Duterte’s photo with Lim would only become compelling if and when the latter issued an affidavit saying that he gave money to the President through his special assistant, Bong Go.

“If Bong Go also has a statement that he gave the money to Mr. Duterte, I think an impeachment proceeding is in order. But we are not in that situation,” Lacson said.

If there would be such sworn statements from Lim and Go, he also vowed that he himself would vote to impeach Mr. Duterte.

“I am speaking not as an enabler or apologist of Mr. Duterte. I criticize when there is a need to criticize. I am only trying to point out that the picture per se, we can interpret what we see there but there are some circumstances that we don’t see in the picture,” he said.

Coming to the defense of the President, the Philippine National Police Director General Ronald dela Rosa said at the hearing that Mr. Duterte immediately ordered to build a case against Lim after he was informed that the businessman was named by Espinosa as among the top drug lords.

“After Espinosa issued a statement that Peter Lim was his supplier, I reported to the President that his kumpare in the picture [is being implicated] and he ordered a case buildup against Lim,” Dela Rosa said.

“The President is very angry with that Peter Lim. So his instruction was to work on it, build a case against him,” he added.