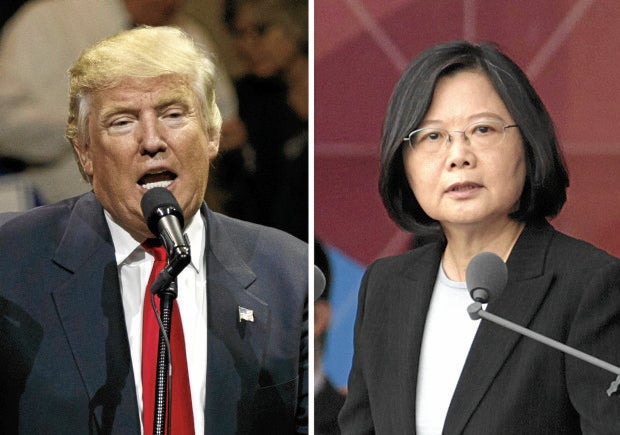 TAIPEI — With a 10-minute phone call and two tweets, Donald Trump inspired banner headlines and renewed hopes across Taiwan for a stronger partnership with the United States, while also inflaming the complex relationships between the United States, mainland China and the self-governing island that China regards as a renegade province.

Whether the US president-elect meant to jump into the generational fight between China and Taiwan remains an open question.

But by speaking to Taiwanese President Tsai Ing-wen, Trump upended four decades of American foreign policy and engaged China directly on the issue of Taiwan, which Beijing has threatened to reclaim by force if necessary.

‘The President of Taiwan’

No American president or president-elect has publicly spoken to Taiwan’s leader since the United States ended their formal diplomatic relationship in 1979.

Four of the US president-elect’s words drew particular attention in Taiwanese newspapers: Trump’s reference, in a follow-up tweet, to Tsai being “the President of Taiwan.”

The phrase is far from benign for China, which regards any reference to a Taiwanese president as an unacceptable acknowledgement of Taiwan’s statehood.

Chinese leaders have indicated they dislike Tsai, who was elected in January from a pro-Taiwan independence party and became the island’s first female president.

Taiwanese are divided over whether they support independence, a formal unification, or the status quo, in which China and Taiwan maintain robust social and economic exchanges while the island retains its democracy and de facto independence.

Chinese President Xi Jinping, however, has warned that the issue of unification cannot be put off indefinitely.

“People will think that the US will keep on helping Taiwan protect itself against China’s threat,” Yang said.

Chen Chun-hao, a 43-year-old designer, said Trump might “bring more help” to Taiwan now that both sides had opened a dialogue.

“I believe that this could help Taiwan in its international status and its global situation,” Chen said.

Kao-cheng Wang, dean of Tamkang University’s College of International Studies, said he believed Trump might increase American exports to Taiwan and try to strengthen economic ties between the two sides.

“Trump will not be restricted by the established foreign policy,” Wang said. “The diplomatic policy may be flexible after he takes office.”

China cut off diplomatic contact with Taiwan in June, one month after Tsai took office, accusing her of refusing to endorse the concept that Taiwan is a part of China.

The Taiwanese presidential office said Trump and Tsai discussed issues affecting Asia and the future of US relations with Taiwan.

Tsai also told Trump that she hoped the United States would support Taiwan in its participation in international affairs, the office said, in an apparent reference to China’s efforts to isolate Taiwan from global institutions such as the United Nations.

“There is no conflict (in that),” he told reporters in Taipei on Saturday. —AP