‘Never let cancer bring you down’ 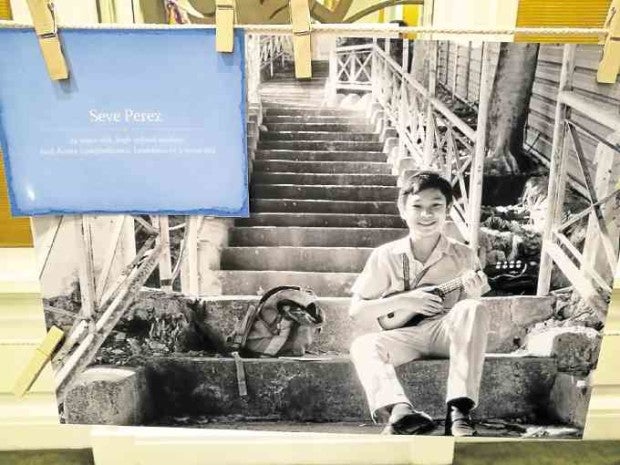 Fourteen-year-old Seve Perez practically spent his early childhood years in hospitals, surrounded by doctors and nurses instead of classmates and teachers.

When he was 3, he battled acute lymphoblastic leukemia, an aggressive form of blood cancer that sent him to the intensive care unit several times and into a coma once. After two and a half years, doctors declared him cancer-free.

“You should never let cancer bring you down,” said Perez, now a sprightly 9th grader who gushed over an easy Math test and blushed when his father teased him about his crush.

“I used to interact more with doctors than teachers, slept in hospital beds more often than my own bed,” Perez said. “But I didn’t give up. Neither should you. Always stay positive and always pray to God,” he added.

The young boy’s story was just one of the many inspiring narratives from Filipino cancer survivors celebrating life and second chances in the exhibit “Living Proof,” a special feature at the launch of the Cancer Coalition of the Philippines (CCPh) in Pasig City.

According to organizers of the coalition, a consolidated and comprehensive cancer plan was imperative in light of the rising incidence of all kinds of cancer in the Philippines, as well as the “twin burden” of managing the patient’s health while protecting the family from financial disaster.

“What we need is a law or a comprehensive Cancer Act that will institutionalize cancer-related government policies … this is what the coalition aims to achieve,” said Dr. Mon Severino of the Philippine Society of Oncology at the coalition’s launch on Friday.

Such a law, Severino said, would increase and regularize financial support for cancer patients, giving them a better chance at survival. Early prevention and detection measures should be established nationwide as well, he added.

Kara Magsanoc-Alikpala of ICanServe Foundation, who cochairs CCPh, said the newly formed group was working toward their goal initially through consultations with various stakeholders, as well as research and needs assessment. Checking out cancer-related bills filed in Congress is a start.

“The building blocks of our  ‘asks’ will be the revised administrative order of the Department of Health (DOH), which is a cancer prevention and control program that sounds very good on paper. In fact, it is an amended version of something they drew up in the 1980s but it had not been fully implemented,” Alikpala said.

The health agency might have been cash-strapped or lacked champions to fully implement the administrative order, but the coalition believes that a law can put the DOH’s cancer strategy into action, she added.

A Cancer Act can guarantee that the DOH’s cancer strategy would be realized, the CCPh cochair said. “Sustained, there would be more predictability, you’d know what to expect (in terms of cost) and you’d be able to plan and achieve outcomes that would have impact,” Alikpala said.

She noted that while the government has rolled out screening programs, coverage remains small and treatment programs were offered only for certain kinds of cancers and even at that, not for all stages.

“There are many gaps that need to be filled … so we are offering ourselves to help the DOH,” Alikpala said. “But we know that we need more efforts from everyone [because] it’s a really complex problem.”

Cancer is now the third leading cause of death in the country, with the top five killers being cancer of the breast, lung, liver, colon-rectum and cervix, all of which are either preventable or treatable when detected in their early stages.

Records show that one out of every 1,800 Filipinos is diagnosed with cancer every year, which translates to more than 55,500 households or over 277,700 people newly affected annually. For every two new cancer cases, one dies within the year of diagnosis.

In a paper on a national cancer plan, Dr. Hilton Lam, director of the Institute of Health Policy and Development Studies at the University of the Philippines, said that a large percentage of cancer patients die or suffer from financial disaster due to lack of fund support and access to medication.

Citing another study, Lam said almost 60 percent of cancer patients spend more than a third or 30 percent of their household income on cancer care, which is tantamount to financial catastrophe; 55 percent of patients depend on their spouses for support and 30 percent on their children.

While the rate of cancer incidence in the country is lower than that in more developed countries, mortality rates are higher for want of early detection and access to treatment facilities and medication.

“There are a lot of things we can actually work on,” said Paul Perez, Seve’s father and executive director of Project: Brave Kids. “I think it’s important for people fighting cancer to know that there’s a group fighting for them.” The coalition, he said, represents the aspirations of all cancer patients and their families, and it is working to enhance the quality of their lives.

Cancer survivor and Philippine Cancer Society executive director Dr. Rachael Rosario said the coalition was a coming together of families, patients and doctors pooling their voices and efforts to find solutions to challenges presented by cancer.

“The coalition is verbalizing and expressing what is on the ground—the needs of patients and their families. It is also about doctors taking care of cancer patients and what we want society, especially the government, to do about this terminal illness,” she added.

Read Next
The ties that bind in the Espinosa killing
EDITORS' PICK
Morales warns vs Sino loans
‘Better Christmas’ ‍seen as PH gets herd immunity by November
Tired of your Wi-Fi signal problems at home? Here’s a solution!
Must-know scams to avoid when buying cars
Megavaccine site opposed
POVA x Mobile Legends Bang Bang: A partnership that’s built to win
MOST READ
Pandemic to be ‘far more deadly’ this year, WHO warns
3 close contacts of OFW with Indian variant tests positive for COVID-19
Megavaccine site opposed
Morales warns vs Sino loans
Don't miss out on the latest news and information.