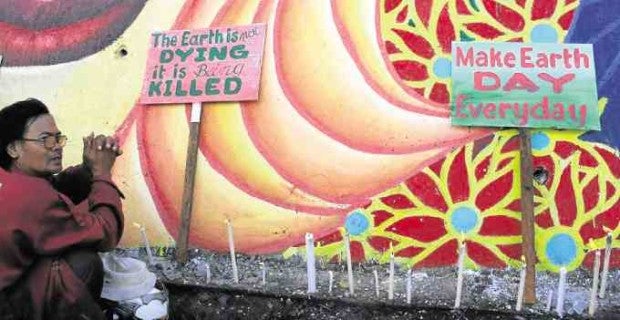 Candles are lighted as Albay residents remember those who died when Typhoon “Reming” devastated the province in 2006. —MICHAEL JAUCIAN

GUINOBATAN, ALBAY—For four kilometers, hundreds of survivors of Typhoon “Reming” (international name: Durian) walked in solidarity on Wednesday to commemorate the 10th year of the tragedy that hit Albay province and left 1,200 people dead and missing.

“Heal the earth as we heal ourselves,” read one of the placards they carried in urging every Filipino to be united in protecting the environment and fight the adverse effects of climate change and global warning.

Mayor Gemma Ongjoco, who led the activity, said it was not yet too late to save Mother Earth if people would only do their share to protect it.

“We don’t want to experience another typhoon like ‘Reming,’ so how do we do that? Let’s be proenvironment. Let’s pray hard, plant more trees and we’ll have a better place to live in,” she said.

Maxima Magnate, 76, recalled how she and her family coped and brought their life back to normal after their house was buried by lahar moved by Reming’s heavy rains. “Everything was gone, but we thank God we are all alive,” she said.

Village chief Esteban Luces said he was happy that the community did not lose hope in spite of the devastation to the lives of hundreds of people.

“What if there’s no bayanihan spirit within ourselves? There’s no more hope for us,” he said.

Eva Ocfemia, regional director of the Environmental Management Bureau, who also survived the storm’s wrath, said improper garbage disposal and the burning of waste have contributed to global warming.

Candles were lighted at a dike in Maipon village, where a mural on Albay residents’ resilience was unveiled on Sept. 14. The dike is six meters high and 300 m long.

The mural, which was painted on the theme Pagsalingoy (Bicol term for reminisce), bears images that depict hope, camaraderie and the resilience of the people of Albay.

In Legazpi City, some 300 people lighted candles and released white balloons during the Mass offered by Mayor Noel Rosal for typhoon victims in Barangay Padang.