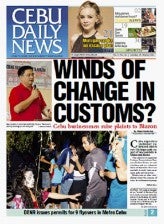 Cebu exporters yesterday expressed alarm over the large-scale export of raw seashells to China and Korea.

They asked newly appointed Customs Commissioner Rozzano Rufino Biazon to curb what they said was a threat to local companies that use seashells to make into accessories, gifts and houseware.

Businessmen also complained about the presence of many law enforcement groups with overlapping roles at the Cebu office of the Bureau of Customs (BOC).

Biazon, who visited Cebu yesterday for a series of forums, said he would look into these problems.

Only a month in his post, Biazon said he wanted to streamline the BOC and make changes.

He said he is reviewing competencies of the staff to see if the right people are on the job.

“We can only implement real reforms in the bureau if we start by cleaning our own backyard,” he said.

“First, I would like to review all systems and procedures in the agency, see every loopholes and make the system more accountable. Second is the upgrading of the computer systems in the bureau and third is putting order in the house and adopting a media accreditation system that will make us engage with the media people who are committed to play their roles as watchdogs,” Biazon said.

At a breakfast meeting in Cebu Country Club, Philexport Cebu executive director Fred Escalona brought up the sale of seashells direct to Chinese traders. He said this has reduced supply to the local market.

“When they sell the raw seashells, it is still of lower value and then the Chinese traders will then create something high value out from it leaving local manufacturers to scamper for supplies. We should be able to reap the benefits of having these supplies first,” Escalona said.

He said exporters have been complaining about traders who sell raw seashells directly to Chinese traders.

One of the biggest users of raw seashells in Cebu is Ramir Bonghanoy of Bon-A ce Fashion Tools Inc., who is also president of the Gift, Toys and Housewares Foundation Inc.

His plant alone needs two tons or 2,000 kilos of seashells, which he uses to make accessories like handbags and jewelry for high-end global brands like Louis Vuitton, Gucci and Prada.

“There is no real shortage yet but it’s already alarming because these traders, including Chinese, Taiwanese and Koreans, are directly harvesting our resources and then ship them directly to their place to be made into high-value products like what we are making here. The problem is there is no job creation in the process,” Bonghanoy said.

At least 60 exporters use seashells in their products as inlays for handbags, furniture, décor and other items.

Local demand for raw seashells is estimated at ten to 12 tons of seashells per month.

The seashells commonly used by Cebu exporters are mother of pearl, which come in brown lip, gold lip and black lip varieties.

“We have already submitted a petition to Philexport to help control exportation of raw seashells if not stop the practice. If we process the raw seashells here, we can create eight to nine jobs for our fellow Filipinos and will help the industry so it’s important that practice should be stopped,” Bonghanoy said.

Escalona said Philexport will prepare a position paper on this for the BOC.

Escalona also raised the lack of BOC personnel in Cebu. Exporters end up paying for the overtime pay of Customs workers just to have shipments checked right away and sent out.

The Cebu Chamber of Commerce and Industry (CCI) raised several concerns in a letter handed over by president Samuel Chioson.

For one, the renewal of accreditation for exporters and importers that is done yearly in Manila is inconvenient. They want it done in Cebu and only once every three years to cut the cost of travel and processing.

There are also several law enforcement offices with overlapping functions in the Customs bureau in Cebu, said the chamber.

Other concerns raised by the CCCI:

— Upgrade the tax payment system due to slow posting of remittances;

— Give importance to tax exemptions for power and shipping industries;

— Hasten the issuance of certificates of exemption;

– Simplify post-entry audit procedure by simultaneously doing it together with assessment to defray costs of the government and private sector.