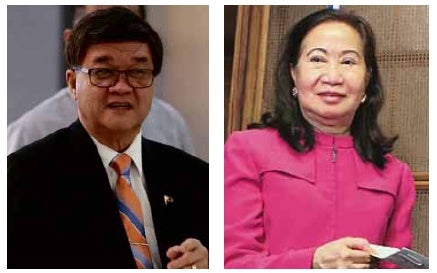 Justice Secretary Vitaliano Aguirre II has accused Macau-based gambling tycoon Jack Lam of attempting to bribe him a few days after authorities cracked down on unauthorized online gaming operations and illegal aliens working at his casino at Clark Freeport in Pampanga.

Aguirre said he believed the bribe offer to him was P100 million a month.

The justice secretary claimed that Lam attempted to pay him off during a meeting at Bonifacio Global City on Saturday, two days after police arrested 1,316 Chinese nationals illegally working at his online gaming business.

Speaking through two interpreters and a former police officer, Lam said he had long been looking for a “ninong,” or godfather, in government to protect his gaming operations that include Fort Ilocandia in Laoag City, Ilocos Norte, according to the justice secretary.

Aguirre said former police officer Wally Sombero asked him if he wanted to be Lam’s ninong, a proposal that the justice secretary turned down immediately.

“I told him ‘no’ in no uncertain terms that I do not want any part of that because we are serious in fighting corruption. If I accepted, which could easily mean P100 million a month, I would lose my moral authority to pursue the reforms ordered by the President,” Aguirre said.

The justice secretary also said the Pagcor chair was also offered a bribe.

Aguirre said Domingo had told him about Lam’s attempt to bribe her to allow Fontana Leisure Parks and Casino at Clark to continue its online gaming operations while he was applying for a license.

He said Domingo was offered a 1-percent cut of Lam’s casino earnings.

“Andrea lost all interest in talking to Lam after that. She just told Lam to pay the government’s 10-percent cut from his casino earnings and that he should first get a license before running online gaming operations in the country,” the justice secretary said.

Aside from rejecting Lam’s bribe offers, Aguirre said he ordered the businessman to stop bribing officials of the Bureau of Immigration (BI) and the National Bureau of Investigation for the release of the Chinese nationals who were arrested for working at Fontana without a working permit.

He accused Lam, with the help of Sombero, of spending at least P70 million to pay off BI agents so they would release the illegal Chinese nationals who either had tourist passports or work permits for other entities at Clark Freeport.

Aguirre said some of the illegal workers had permits issued by the Cagayan Economic Zone Authority, the only other entity aside from the government allowed to grant online gaming licenses in the country.

Lam had reportedly offered at least P200,000 for each person for the release of the Chinese workers rounded up last Thursday.

“He (Lam) is funding a disinformation campaign to undermine our successful arrest of 1,316 illegal workers from China. We are currently waiting for the final report on the arrests and I assure you, heads will roll at the BI (for allowing the release of the arrested Chinese workers),” Aguirre said.

BI spokesperson Tonette Mangrobang said the 1,316 Chinese workers would be charged with overstaying, violation of the limitations and conditions of their visa, and engaging in an unlicensed online gaming business.