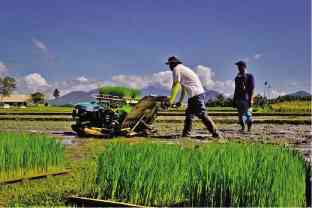 A farmer uses a mechanical transplanter on a demonstration plot at the International Rice Research Institute in Laguna province. —CHRIS QUINTANA/CONTRIBUTOR

A cross between a tall, vigorous variety from Indonesia, called Peta, and a dwarf variety from Taiwan, called Dee-geo-woo-gen, the resulting crop was called the “miracle rice.”

The semi-dwarf rice variety was developed specifically to rescue Asia from famine during the 1960s and 1970s.

Fifty years after the development of IR8, Agriculture Secretary Emmanuel Piñol is still bothered by the question: Why are farmers poor?

Piñol, who described himself as a farmer, said he set out on a nationwide tour and consultation, called “Biyaheng Bukid,” to assess the state of Philippine agriculture and learn about the living conditions of farmers.

Piñol, during a program on Tuesday at Irri to mark the 50th year of IR8, blamed the reliance on imports and lower spending on local rice production, corruption and exploitation by traders and middlemen.

He said the impact of climate change would hurt the Philippines if the country relies heavily on rice importation.

If rice-producing countries in Asia are hit by the adverse effects of climate change at the same time, “we will have nowhere to import rice from.”

Hernandez said the local market will be flooded with cheap rice due to the Association of Southeast Asian Nations integration and the Department of Finance’s proposal to remove the quantitative restrictions on rice.

This, Hernandez said, will force local farmers to lower their prices.

“The consumers will benefit [from lowered prices], but farmers will not profit,” he said.

Piñol also said corruption, citing officials who think of making money out of government transactions, as another roadblock in improving agriculture.

“When people in government start thinking that way, then everything is messed up because programs will be implemented not because these lift people from poverty but because these will make money for the [project] proponent,” he said.

Farmers have also been exploited by traders and middlemen, he said.

This problem can only be solved by implementing institutional reforms to address the lack of drying and postharvest facilities, he added.

“This is a major problem that prevents [farmers] from taking a stronger stand against manipulation of traders and middlemen,” Piñol said.

Other problems hindering the rice industry’s growth were “hazy” statistics in the rice industry, irrigation, lack of storage facilities and farmers who refused to embrace modern ways in agriculture.

Erlinda Generalla, 66, a farmer from Bay town, acknowledged Piñol’s observations but said people do not understand their situation.

Generalla said even if they wanted to try out new farming technology or techniques, they cannot risk losing money.

“If we do, we would be forced to pawn our farms,” she said.

Piñol said a Department of Agriculture program in Samar province is ongoing to educate farmers on the new ways of farming.

Read Next
‘Bonifacio, not Marcos, is the real hero’
EDITORS' PICK
TECNO Mobile sparks up summer with fun livestreams, great prizes
ING Pay is the safe and reliable way to pay – here’s why
House-to-house COVID-19 testing pressed to get ‘true’ PH state
PGH seeks more plasma donors as it loses 5 patients to COVID-19 daily
Despite ‘red-tagging,’ community pantries rise to 350, says advocate
Smart is fastest 5G Network in PH – Ookla
MOST READ
PH military pouring naval, air assets near site of Chinese incursions in WPS
US adds 116 countries to its ‘Do Not Travel’ advisory list
PH-Canada labor agreement coming soon – DOLE
Ganging up on a good thing
Don't miss out on the latest news and information.