MANILA — Inquirer’s late editor-in-chief Letty Jimenez-Magsanoc was among 19 “real heroes” memorialized at the Wall of Remembrance at the Bantayog ng mga Bayani  Wednesday night for fighting the repressive martial rule.

Magsanoc, who led the Inquirer’s editorial team for 24 years until she passed away on Christmas eve last year, was honored as “a heroine in the struggle against martial law” for standing up to the dictator with her brand of fierce journalism.

The citation for Magsanoc read:

“For unleashing the power of the written word for the common good, for justice, freedom and democracy, for challenging and exposing the excesses of the Marcos dictatorship through the media even at great personal risk;

“For testing the limits of press freedom as writer and editor, for defying media restrictions and censorship under martial rule, and for facing up to the wrath of the dictatorship.

“For encouraging and giving space for bold and daring writers, despite threats from the powers that be, and for speaking truth to power without fear, for her faith in her fellow Filipinos, for placing above herself God, family and country.

“In testimony thereof, the Bantayog ng mga Bayani Foundation hereby recognizes Leticia Jimenez-Magsanoc as a heroine in the struggle against martial law, and hereby honors her by engraving her name on the wall of remembrance on this 30th day of November 2016.”

Magsanoc was instrumental in shaping the Inquirer’s brand of courageous and agenda-setting journalism, shepherding the editorial team towards becoming both a hard-hitting yet, in her own words, “a very feeling newspaper, sensitive to the readers.” 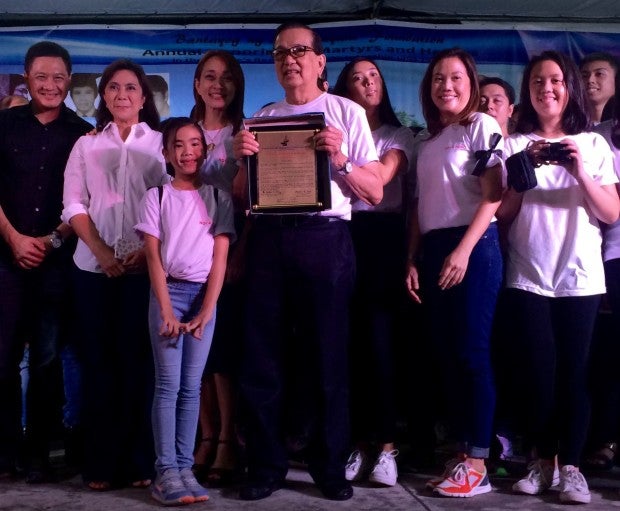 The family of the late editor-in-chief, Leticia Jimenez Magsanoc, receives the plaque recognizing her as a hero at the Bantayog ng mga Bayani on Nov. 30, 2016. Mrs. Magsanoc is specifically remembered for her courageous efforts in journalism to fight the Marcos dictatorship’s censorship. Holding the plaque is Dr. Carlos Magsanoc, the widower of Mrs. Magsanoc.  Second from left is Vice President Leni Robredo. (PHOTO BY LYN RILLON/ INQUIRER)

Speaking briefly in receiving the honor for his late wife, Dr. Carlos Magsanoc thanked Robredo for gracing the rites, and expressed his thanks for the Bantayog ng mga Bayani Foundation.

Their names were etched in gold on the granite wall, joining 268 others who had defied dictator Ferdinand Marcos’ martial rule.

The rites, held two weeks since Marcos was secretly buried at the Libingan ng mga Bayani, was marked by protest, with relatives and colleagues of the honorees chanting “Marcos, Hitler, Diktador, Tuta!” and “Never Again.”  SFM