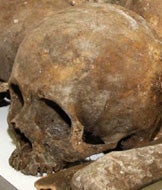 MANILA — Skeletal remains of four people believed to have been murdered over their involvement in illegal drug trade were exhumed in Tala, Caloocan and Bulacan province on Tuesday afternoon.

In a phone interview, Senior Supt. Johnson Almazan, Caloocan police chief, said one grave was located at a grassy portion behind the mosque of Phase 12, Barangay 188. However, the other, which was found near a river, was already within the boundary of Bulacan.

Almazan said policemen from Caloocan and the Northern Police District started digging in the morning after receiving a tip that the site has been used to bury people murdered over illegal drugs.

The victims were believed to have been buried there months or years before, and the police are expecting to exhume more in the coming days.

“Findings show that even before the Duterte administration assumed office in July, the drug lords were already cleansing their ranks to eliminate possible witnesses,” said the NPD director, Senior Supt. Robert Fajardo, in a separate statement.

Phase 12 has been notorious for illegal drugs. Non-residents, and even law enforcers before, could not easily penetrate the area over fears of getting ambushed.

“Now, slowly, we can already go in and out of the place,” Almazan said.

There were no lamp posts at the site. It was a dark, grassy vacant lot beside a dirty river. Scattered at the site were bird and chicken cages of different sizes.

In each shallow grave were remains of two people. These were turned over to the scene of the crime operatives for further investigation.

The police are also looking at the possibility that the victims belong to rival drug syndicates.

“We talked to the imam about this and he was also shocked. He considered this [graveyard] a desecration of the mosque,” Almazan said.

Although, identifying the victims would be a “long and tedious process.” Almazan believed that the discovery “was a good start.”

“The discovery will give way for an in depth investigation to identify those killed and reported missing persons several years ago. This is to give justice to these helpless victims. We encourage the families to identify the remains of their loved ones,” said Fajardo, adding the police might file charges in court.  SFM