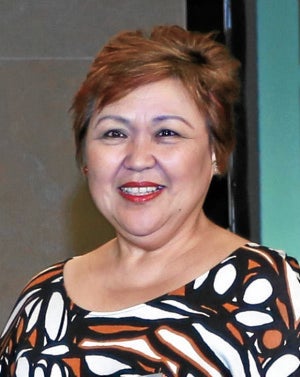 The chair of the National Historical Commission of the Philippines (NHCP) on Tuesday stepped down from her post, expressing dismay over the burial of the dictator Ferdinand Marcos at Libingan ng mga Bayani in Taguig City.

In a statement, Maria Serena Diokno said the Marcos burial at Libingan was “wrong, denies our history, erases the memory of lives lost and destroyed, mocks the collective action we took to oust the dictator, and denigrates the value of our struggle for freedom.”

Her father, former Sen. Jose W. Diokno, was among the opposition leaders rounded up by Marcos upon his declaration of martial law in 1972.

Malacañang said it respected Diokno’s decision to quit as NHCP chair, as it reiterated that President Duterte was standing firm on his decision allowing the Marcos burial at Libingan.

“At this moment in our history, every voice counts and I wish to place mine on the side of history: not the history that the Duterte [administration] ignores, but the history that beckons our people to demand justice that even the highest court of the land will not bestow,” Diokno said.

She said she would “join the popular assertion of our history” on Wednesday and “look forward to more in as many public venues as possible.”

She was referring to the rallies to be held in Metro Manila, including at the People Power Monument on Edsa in Quezon City, to condemn the Marcos burial at the Taguig cemetery.

The NHCP earlier opposed a Marcos burial at the heroes’ cemetery, even releasing a study, “Why Ferdinand E. Marcos Should Not Be Buried at Libingan ng mga Bayani,” in August.

The study cast doubts on Marcos’ record as a soldier during World War II, saying that it was “fraught with myths, factual inconsistencies and lies.”

In her statement, Diokno also rebuked the nine members of the Supreme Court, saying they adopted a “narrow view” when they allowed the Marcos burial at Libingan to proceed.

As for Mr. Duterte, she said he “could have taken the higher ground” but “he chose not to.”

“Worse, he justifies his ‘legalistic’ action by claiming, falsely, that ‘there’s no study, no movie about it (Marcos’ record as a leader), just the challenges and allegations of the other side,’” she said.

“For a moment I thought I could remain at the (NHCP) and protect our history from those in and out of government who attempt to deface it. But the multitude of especially young Filipinos who have come out in defense of history and are prepared to coauthor it for their generation and their future point to one clear realization: They, we all, will guard our history,” Diokno added.

She said her resignation was effective Dec. 1. Diokno was appointed a member of the NHCP in 2011 by then President Benigno Aquino III.

Among the groups staging rallies today, Bonifacio Day, to protest the Marcos burial at Libingan, is the Block Marcos movement whose members were to camp out in front of the cemetery on Tuesday night. They will proceed to the People Power Monument on Edsa today to join the protest against the Marcos burial.

“For us, (Libingan ng mga Bayani) is the crime scene. This is where they are trying to subvert history and where they have offended the victims of martial law,” Melchizedek Babilonia, spokesperson of Block Marcos, told the Inquirer on Tuesday.

The group, composed mostly of young individuals, was formed after the Supreme Court handed down the decision that there was no legal prohibition to a Marcos burial at Libingan.

Then they will proceed to the rally organized by the Coalition Against the Marcos Burial (CAMB) at the People Power Monument on Edsa.

Susan Quimpo, a member of Martial Law Chronicles Project and CAMB, said the protest venue would serve as a reminder that people power ousted the dictator.

“This is where the people revolted toward the final insurrection that pushed Marcos to leave the country,” Quimpo said.

Various labor groups will march on Malacañang not just to express disappointment over Mr. Duterte’s unfulfilled promises to workers but also to condemn him for enabling the Marcos burial at  Libingan.

After the rally at Chino Roces Bridge, the labor groups will join other protesters at the People Power Monument.

Bonifacio Ilagan, convenor of the Campaign Against the Return of the Marcoses to Malacañang, said his group would also join the CAMB rally.

In a statement, the prelate reminded Filipinos that they should never forget the dark moments of the Marcos regime. —WITH A REPORT FROM MARLON RAMOS