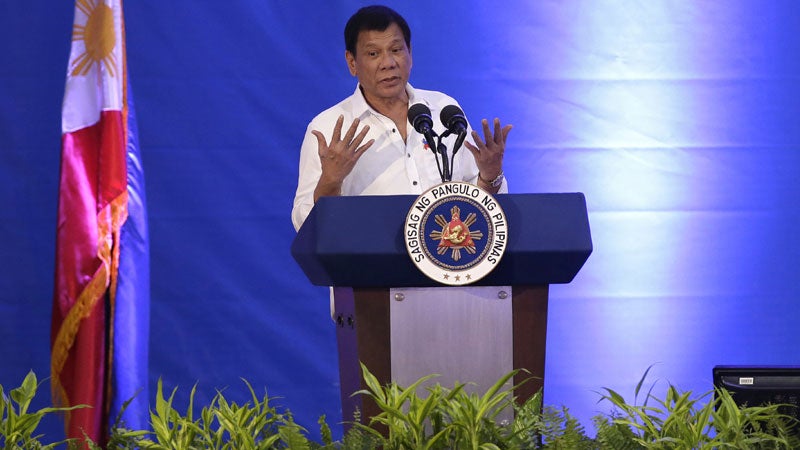 President Duterte has threatened to kill human rights activists critical of his war on illegal drugs and called warnings he could be charged in the International Criminal Court (ICC) for the bloody campaign “bullshit.”

In a speech in Malacañang on Monday night, Mr. Duterte said those accusing him of ordering the summary execution of drug suspects should be blamed if the country’s drug problem worsened.

“The human rights (defenders) said I ordered the killings. I told them ‘OK. Let’s stop. We’ll let them (drug users) multiply so that when it’s harvest time, more people will die,” the President said at the inaugural switch-on of a coal-fired power plant.

“I will include you because you are the reason why their numbers swell,” he said in Filipino.

An ICC prosecutor last month said The Hague-based tribunal may have jurisdiction to prosecute the perpetrators of the drug-related killings.

“You threaten me that you will jail me? International Criminal Court? Bullshit,” Mr. Duterte said on Monday.

He scolded the United States for what he called hypocritical threats to try him in the ICC, to which Washington itself is not a signatory. He did not specify when the US threat was made.

“America itself is threatening to jail me in the International Criminal Court,” Mr. Duterte said. “It is not a signatory of that body. Why? Because at that time, they were afraid Bush would face it.”

For months, the President has been ridiculing concerns that extrajudicial killings could be taking place in his antidrug war, and the United States, European Union and United Nations have been the preferred targets of his comments.

The brash former mayor and prosecutor said lawyers in Europe were “rotten,” “stupid” and had a “brain like a pea.”

This month, Mr. Duterte said he might follow Russia’s move to withdraw from the ICC, describing it as “useless.”

According to Mr. Duterte, the West has failed to comprehend the gravity of the Philippines’ drug problem. He has said he is ready to “rot in jail” to achieve his goals.

There is nothing wrong with threatening to kill bad elements, he said on Monday.

“I will never allow my country to be thrown to the dogs,” the President said. “I said, when I was a mayor, ‘If you destroy my city with drugs I will kill you.’

“Simple as that …. When was it a crime to say, ‘I will kill you,’ in protecting my country?”

Mr. Duterte showed his audience a 10-centimeter-thick pile of documents containing the “validated list” of about 5,000 public officials allegedly behind the illegal drug trade.

He said most of those benefiting from the illicit business were village officials who were earning “easy money.”

“[That’s why] I acceded to [the postponement of] an election this year for the barangay captains. We would have lost to the money of the drug industry,” he said.

The President had blamed Arroyo and his predecessor, Benigno Aquino III, for allowing the drug trade to proliferate during their incumbency.

“I am not trying to scare you,” he said.

“This is the drug industry of the Philippines. These are all the names,” he said.

“I showed this to [former] President Arroyo. I said, ‘Ma’am, we are in a bind. I really do not know how to [handle this]. I surrender. I cannot do this.’”

Even if he wanted to kill all those on the list, Mr. Duterte said he “would not have the time and resources to do it.”

He said “narcopolitics” was already existing in the Philippines “given the so many thousands of policemen and mayors involved” in the sale and distribution of illegal drugs.