Protesters camp out at Libingan on eve of Nov. 30 anti-Marcos rally 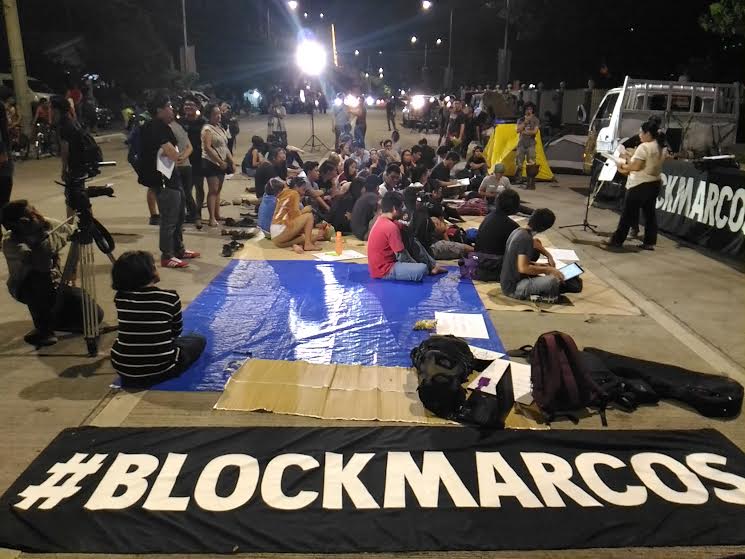 The Block Marcos Group camps out at the Libingan ng mga Bayani on Nov. 29, 2016, the eve of the Nov. 30 protest against the hero’s burial of dictator Ferdinand Marcos. (PHOTO BY DEXTER CABALZA, INQUIRER)

MANILA — On the eve of a large protest against the recent burial of former President Ferdinand Marcos, around 60 individuals staged an “open-mic, peaceful protest” outside the Libingan ng mga Bayani (LNMB) in Taguig on Monday.

Kat Leuch, spokesperson of the Block Marcos group, which organized what it dubbed #OccupyLNMB, said the protest was a fulfilment of their promise to return to the heroes’ cemetery after Marcos was slipped from his mausoleum in Batac, Ilocos Norte to the Libingan on Nov. 18.

The Supreme Court, voting 9-5, with one inhibition, upheld President Duterte’s order to allow Marcos’ burial at the Libingan ng mga Bayani, junking seven petitions that wanted to bar the burial and had questioned whether Duterte abused his discretion. The protesters were angry the Marcos family buried the dictator before they could file a motion for reconsideration.

Mr. Duterte promised during his campaign period to allow the burial of the late strongman at the Libingan as a step of national healing and unity. The President said Marcos once served as a President and soldier and could thus be buried at the heroes’ cemetery.

A 31-year-old and University of the Philippines law student, Leuch said the protest “would provide the space for the youth to talk about what happened during martial law and to discuss how what they can do on the issue of Marcos’s burial.”

“We condemn and we want to hold accountable President Duterte for allowing a dictator to be buried at Libingan. We call for [Marcos’s] body to be exhumed from [Libingan ng mga Bayani] because he does not to deserve to be buried there,” Leuch said.

“What the President did is symbolic of allowing a revision of our history, that it is OK to be a dictator and still be heralded as a hero after all the ills you have caused in the country,” she added.

The 60 individuals, mostly from the youth, brought their own mats and tents to camp outside the gates of Libingan. 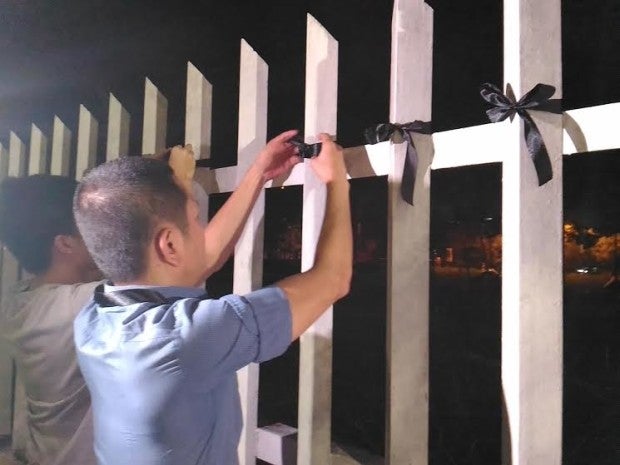 Members of the Block Marcos Group tie black ribbons around the railing of the gate to the Libingan ng mga Bayani on Nov. 29, 2016, to protest the hero’s burial given to dictator Ferdinand Marcos. (PHOTO BY DEXTER CABALZA, INQUIRER)

A short drizzle poured over the protesters for less than five minutes, prompting others to open their umbrellas and cover their heads with their hoods; some took shelter in their makeshift tents but the program did not end.

Leuch said they would stay until 6 a.m. of Thursday, on Nov. 30, Bonifacio Day, when labor groups on the way to a rally in Mendiola in Manila would pick them up.

In the afternoon of Wednesday, they will join the bigger protest at the Edsa People Power Monument in Quezon City.

“Part of Duterte’s promise was to end contractualization among workers, but up until now, nothing has changed,” Leuch said. “But when it comes to burying Marcos, he was fast. It just shows what the President’s priority is.”  SFM