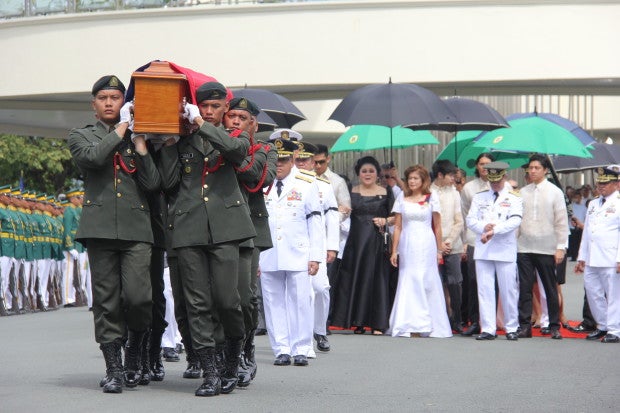 The burial of the late dictator Ferdinand Marcos causes irritants between the Duterte administration and the Reds. Photos from OACPA HPA

The government’s peace talks with the communists will be put in danger after President Duterte allowed the burial of late dictator Ferdinand Marcos, the National Democratic Front of the Philippines (NDFP), the political arm of the Communist Party of the Philippines (CPP), said on Wednesday.

NDFP peace panel chair Fidel Agcaoili said whitewashing the crimes of Marcos under his brutal martial law regime would run counter to the Comprehensive Agreement on Respect for Human Rights and International Humanitarian Law (CARHRIHL), which the NDFP and the Government of the Republic of the Philippines (GRP) signed in 1998.

Under the Article 5, Part III of the CARHRIHL, both parties are required to “respect and support the rights of the victims of human rights violations during the Marcos regime and obliges the GRP to render them justice and enable compensation to them,” said Agcaoili.

“The GRP’s attempt to obliterate Marcos’ crimes from the nation’s collective memory and falsely portray him as a hero is a brazen violation of the CARHRIHL,” he said.

“They are moreover detrimental to the ongoing peace negotiations because they seriously put to doubt whether the GRP is at all capable of complying with any future substantive agreements that may be forged,” Agcaoili said.

He said the secrecy-shrouded burial of Marcos was part of a “sinister scheme” to mask the crimes committed during his decades-long term and to “revise the people’s historical judgment against him.”

President Duterte, a known ally of the left, has declared a ceasefire with the CPP and its armed wing, the New People’s Army last August./ac