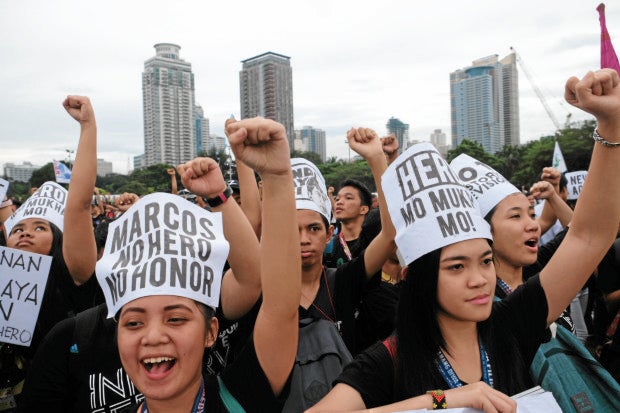 Are the recent terror threats being used yet again as a scare tactic against protesters?

A militant alliance called on the Philippine National Police (PNP) not to use bomb scares to threaten people against gathering to protest the sneaky burial of the late dictator Ferdinand Marcos at the Libingan ng mga Bayani.

“The PNP must not use recent bomb threats as justification for the suppression of democratic rights and for more repressive measures,” Bagong Alyansang Makabayan (Bayan) Secretary General Renato Reyes Jr. said in a statement on Tuesday.

On Monday, an improvised explosive device (IED) was found in a trash bin near the United States Embassy in Manila.

Dela Rosa said the “terror act” could be the group’s “diversionary tactic” while the military is launching offensives against them after they occupied an abandoned town hall in Butig, Lanao del Sur and several other buildings and houses there since last week.

“It is necessary to remind the PNP of this because once upon a time in our history, such threats were used to suppress the people’s protests. Which is why we continue to shout ‘never again’ in the streets,” Reyes said.

“The bomb threat comes just two days before the November 30 rallies. We warn against any attempt to impose restrictive measures or scare tactics on protesters,” he said.

“Like we said, never again. And not this time.”

Bayan supports the workers’ march to Mendiola tomorrow as they assail the anti-worker legacy of the Marcos dictatorship, many of which remain today,” he said.

A massive anti-Marcos protest is expected to happen at the People Power Monument along Edsa White Plains in Quezon City on Wednesday. CDG/rga