NPA rebels: The next generation 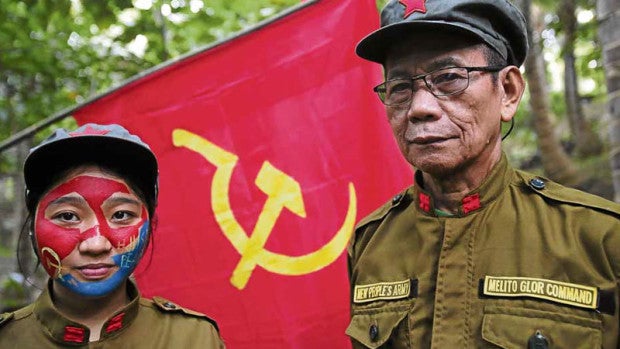 SIERRA MADRE—In the late-night hours and amid the chirp of crickets, Katryn welcomed a huddle of exhausted local journalists in cheerful spirits like she was home. “Coffee?” she asked with a comforting smile.

Comrade Katryn is her nom de guerre, however, and for her, home is a rebel encampment concealed in the rain-soaked wilderness of Sierra Madre, the country’s longest mountain range situated in Luzon.

Katryn, 24, walked away from her family two years ago to join one of the world’s longest-raging Marxist rebellions.

Mostly in their 20s and 30s, a few dozen guerrillas of the communist New People’s Army (NPA) lugged M16 rifles and grenade launchers on a southern Luzon plateau where red hammer-and-sickle flags adorned a makeshift hall.

Most wore mud-stained boots while cooking over wood fires or guarding the peripheries of the encampment, just 3 kilometers from the nearest Army base.

They’re part of a new generation of Maoist fighters who reflect the resiliency and constraints of an insurgency that has dragged on for nearly half a century through six Philippine presidencies, while Cold War-era communist insurgencies across much of the world have faded into memory.

They are driven by some of the same things as their predecessors, including crushing poverty, despair, government misrule and the abysmal inequality that has long plagued Philippine society.

“The NPA has no other recruiter but the state itself,” a young rebel, Comrade May, told The Associated Press (AP).

May joined the NPA two years ago after her fiancé died of kidney failure because his family was too poor to afford expensive dialysis treatment.

A lowly paid factory worker, May couldn’t do anything. Government hospitals overwhelmed by swarms of indigent patients failed to give her fiancé immediate care.

“His family gave up and reserved the remaining money for his coffin,” said May, who now serves as a medic for fellow guerrillas and destitute villagers beyond the government’s reach.

Katryn came from a middle-class family that could afford a car, a house and education. She wanted to become a journalist, but got profoundly disaffected by a government and laws that she said could not protect the working class, including her father who lost his job as an engineer for joining a trade union.

She said she went underground as an activist and bid goodbye to her father, her mother, who was a former teacher, and a life of modest comforts. “It was difficult. I cried,” she said.

Now adjusted to rebel life, Katryn said she’d stay for good. She agreed to face news cameras with just a dash of red and blue paint—the colors of the revolution—to camouflage her identity.

The rebellion’s longevity is best personified by Jaime Padilla, or Comrade Diego, who was introduced as the new NPA commander and spokesperson in a region that has seen the ebb and flow of the insurgency.

Now 69, he took up arms when then dictator Ferdinand Marcos declared martial law in 1972, supposedly to quell the spreading communist insurrection that began four years earlier.

Donning a newly designed ceremonial khaki uniform topped by a Mao cap, the folksy rebel leader with a ready smile gave an upbeat assessment of the rebellion.

The military, however, says it has largely beaten back the NPA guerrillas in most of the provinces south of Manila where Padilla’s rebel forces are based.

Battle setbacks, surrenders and infighting have weakened the rebel group, which is blacklisted as a terrorist organization by the United States.

A confidential government assessment obtained by AP says the guerrillas had declined to 3,800 fighters with more than 4,500 firearms in the first half of the year, with about 700 of the country’s 42,000 villages affected by the insurgency.

The NPA “remains as a threat to national security due to its stance of not abandoning the armed struggle,” the report said.

“It’s true that the armed struggle has gone through ups and downs, that’s a part of history,” Padilla told AP.

But he added that the rebellion “will not disappear because of the fundamental needs of the people. The problems have persisted, and that’s the platform of the rebellion.”

Founded in 1968, the Communist Party of the Philippines (CPP) which oversees NPA operations has held peace talks with six Presidents, including Rodrigo Duterte, whose rise to power in June sparked rebel optimism due to his searing anti-US rhetoric, populist stance and appointments of several left-wing Cabinet members. Both sides declared separate and indefinite ceasefires in August.

But the guerrillas found themselves in a dilemma after Mr. Duterte was accused of gross human rights violations in his war on drugs which has left a large number of poor suspected drug users and dealers dead.

Some of the slain suspects were rebel followers who were never involved in drugs, Padilla said.

Mr. Duterte’s recent decision to allow Marcos’ burial at Libingan ng mga Bayani, a heroes’ cemetery, his walking back on his angry threats to scale down Philippine engagements with the US military and rebel allegations of military violations of its own ceasefire have dampened the optimism.

About a month ago, Padilla’s rebel command offered to provide security to Mr. Duterte, calling him a patriot and suspecting that American forces may covertly take steps to kill or oust him over his anti-US stance.

After Marcos’ burial at Libingan, the CPP denounced Mr. Duterte for showing “gross disrespect and insensitivity to the Filipino people’s sufferings under the brutal martial law rule” and urged him “to reverse this historical wrong” or risk facing mounting protests and political isolation.

Ready for peace and war

But Padilla said the guerrillas would remain sincerely engaged in Norway-brokered peace talks that have given them respite from decades of fighting that is estimated to have left about 40,000 combatants and civilians dead.

“While in a ceasefire, we continue to consolidate our ranks, our recruitment of our forces from the mass bases who are ready to revolt,” he said.

“We can talk to (the government) at the table to resolve the people’s problems,” he said. “We’re always prepared for any breakup and continue our armed struggle.” —AP