An improvised explosive device (IED) which the police said was similar to the one used in the Sept. 2 Davao City night market bombing was discovered near the US Embassy in Manila on Monday morning.

Witnesses said someone from a moving taxi hurled a package into a trash bin on Roxas Boulevard, about 200 meters from the embassy, around 2 a.m.

A streetsweeper found the package and alerted the police around 6 a.m. A bomb squad detonated the IED two hours later.

In a press briefing at the Manila Police District, Philippine National Police chief Director General Roland dela Rosa said he considered what happened to be an “attempted act of terrorism.’’

But the PNP chief was quick to point out that “the government will not use an incident that will cause panic, fear and undue harm on its own people to declare martial law.”

The public should also “not accuse the government of being the one behind this,” Dela Rosa stressed.

Investigators said the IED was made up of an 81-millimeter mortar round, a detonating cap, a cellular phone, and a 9-volt battery as power source.

Dela Rosa said it had a “signature” similar to the bombs used by the Maute terrorist group. The military began an operation on Thursday against the group, which staged a deadly bombing in September that killed 15 people in Davao, President Duterte’s hometown. 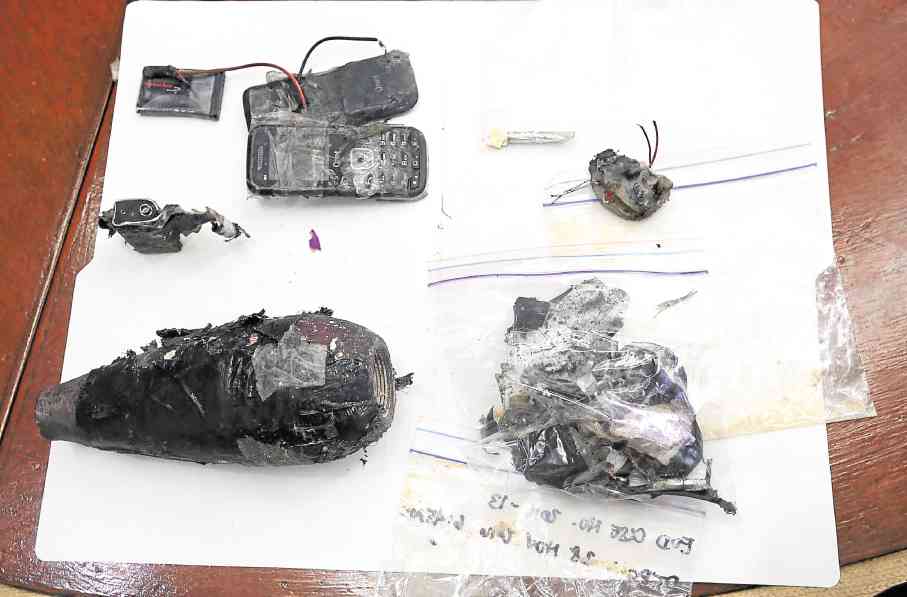 The bomb components include an 81-mm mortar round.

Dela Rosa said whoever deployed the IED did it “not just to scare but to harm,” saying its explosion could hurt people and damage structures within a 100-meter radius.

There was no damage from the controlled detonation, said MPD director Senior Supt. Joel Coronel, although the incident created a traffic jam in the area.

Business at the US Embassy continued as normal, with dozens of Filipinos queuing outside for visa applications. There was no immediate comment about the incident from embassy officials.

Dela Rosa said Islamic militants who have pledged allegiance to the Islamic State (IS) group were probably behind the incident. 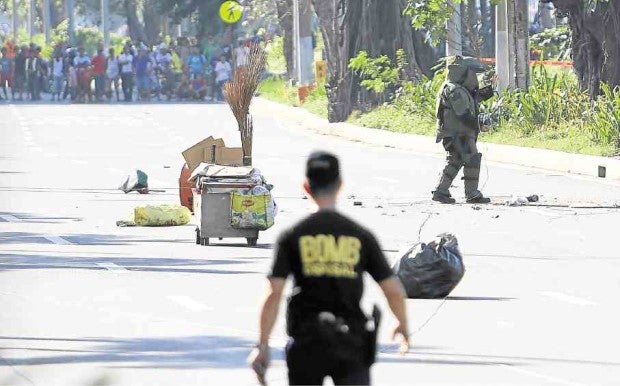 A bomb squad secures a section of Roxas Boulevard to retrieve an improvised explosive device (encircled) hurled from a taxicab early Monday. —PHOTOS BY MARIANNE BERMUDEZ

“Because of an ongoing police-military operation there, [the militants] have many casualties. We can theorize that this is a diversion to loosen our operations,” he said. —WITH REPORTS FROM THE WIRES