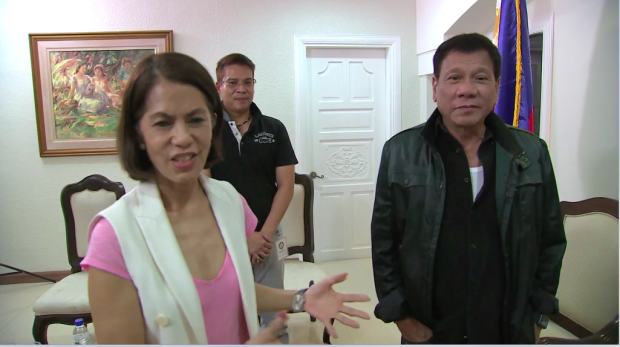 Gina Lopez meets with President-elect Rodrigo Duterte last May as she accepts his offer to become the environment secretary of his administration. SCREENGRAB FROM RTVM

MANILA — President Duterte has reappointed environment activist Gina Lopez as secretary of the Department of Environment and Natural Resources.

Interestingly, Mr. Duterte made the announcement during the inaugural switch-on of a new coal power plant in Concepcion, Iloilo, held at the Rizal Hall of Malacañang on Monday evening.

“I reappointed her because she was bypassed (by the Commission on Appointments). I like her (because) she is very strict,” the President said, referring to Lopez’s staunch defense of government regulations against pollution and over-extraction of minerals.

Lopez has been known to campaign against coal plants and mining before the President gave her the environment portfolio, a move that surprised even her fellow environmentalists.  SFM