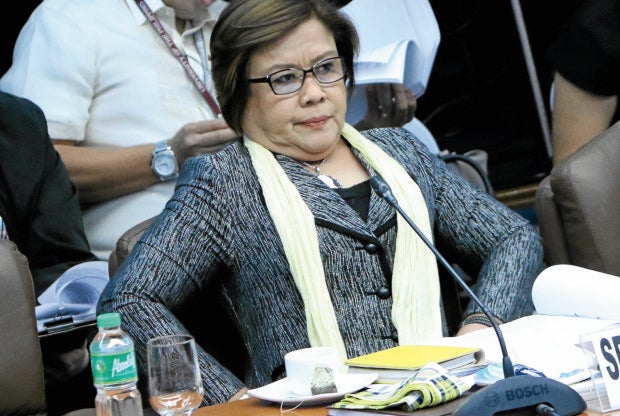 Sen. Leila de Lima has asked the Supreme Court to immediately act on her petition for writ of habeas data so as to stop the continued acts of slut-shaming, sexual harassment and psychological violence committed against her by President Duterte and his men.

De Lima filed a Memorandum ex abundanti cautela (out of an abundance of caution) in the habeas data case she filed at the SC last Friday or a day after the House justice committee reopened its hearing on the alleged proliferation of the illegal drugs at New Bilibid Prison to listen to her former bodyguard and boyfriend Ronnie Dayan testify against her.

Dayan, who was arrested after he went into hiding to avoid the House inquiry, alleged he received money from confessed drug lord Kerwin Espinosa on the instruction of De Lima.

In her memorandum to the high court, De Lima cited several grounds by which the high court should issue a writ of habeas data against Mr. Duterte and his men.

“President Duterte is not immune from being sued in habeas data for collecting and publicizing information about her private life and alleged private affairs because his acts constitute slut-shaming, sexual harassment and psychological violence,” her memorandum said. —CHRISTINE O. AVENDANO

Read Next
Trump assails effort to recount votes; aide slams Romney
EDITORS' PICK
PH to import 60,000 tons of fish to cover shortage
Gear up and get ready to play with Yamaha Mio Gear
Over 3 Million worth of prizes to be won at Smart Padala’s SENDali Manalo Promo!
Acer starts the year off strong with the Aspire Vero National Geographic Edition
#VotePH2022: COVID, power woes loom as poll concerns
Workers are exempted from ‘no vax, no ride’ policy – DOLE chief
MOST READ
1Sambayan names 7 aspirants in its 2022 Senate lineup
Cold-case investigation names surprise suspect in Anne Frank’s betrayal
Guevarra to Acosta: Obey rules on unvaccinated
Emma Stone calls Andrew Garfield a ‘jerk’ after he ‘lied’ about his ‘Spider-Man: No Way Home’ appearance
Don't miss out on the latest news and information.