Church bells ring for an end to killings | Inquirer News

Church bells ring for an end to killings 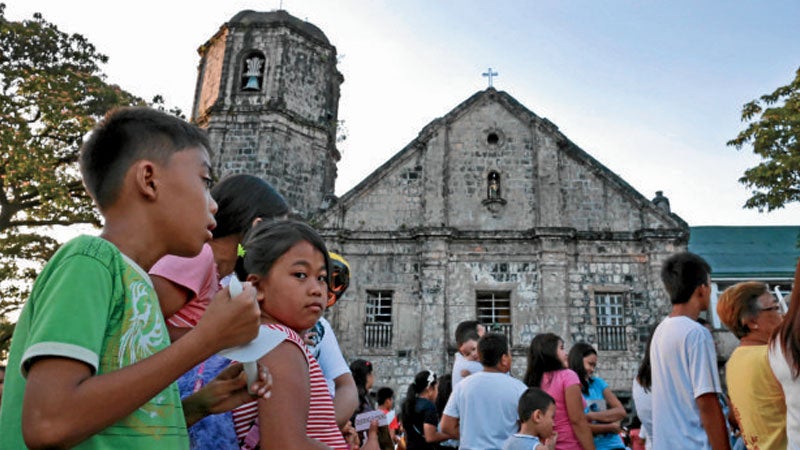 Bishop Joel Z. Baylon announced during Sunday Mass the ringing of church bells in Albay province every night at 9 p.m. as a signal to the faithful to pray for an end to extrajudicial killings in President Duterte’s war on drugs. The head of the Diocese of Legazpi announced his call for “Prayers at Nine” in a letter to Mr. Duterte that was read in 45 churches throughout the province a day after the President repeated his vow to execute drug addicts, In this file photo, Catholic devotees flock to a church in Camalig, Albay province. MARK ALVIC ESPLANA Inquirer Southern Luzon.

Bishop Joel Z. Baylon announced during Sunday Mass the ringing of church bells in Albay province every night at 9 p.m. as a signal to the faithful to pray for an end to extrajudicial killings in President Duterte’s war on drugs.

The head of the Diocese of Legazpi announced his call for “Prayers at Nine” in a letter to Mr. Duterte that was read in 45 churches throughout the province a day after the President repeated his vow to execute drug addicts, urging them to stay indoors or be silenced forever.

“We will ring the bells of our churches and chapels to call our people to prayer, to ask God to bless us all with his grace of mercy and compassion,” Baylon said.

“Together, we can make a difference and significantly reduce this disorder in our midst,” he added.

Baylon said the ringing of bells and offering of prayers would continue for as long as necessary.

“We are in full support of your desire to eradicate this drug problem,” he told President Duterte in his letter, but he lamented the loss of 4,000 lives in the violence that had accompanied his campaign.

“It saddens us to see that the majority of the victims are the very same poor whose lives you promised to protect and alleviate from the shackles of abject poverty,” he said.

Speaking before judges, lawyers and fellow graduates from the San Beda College of Law on Saturday night, Mr. Duterte said:

“In the coming days, I will make it a must, that all of you who are into illegal drugs should not step out of your house … I don’t have (enough) jails. You just stay in your home and lock yourself up. If you go outside, son of a bitch, I will kill you if I see you outside.”

The President’s warning came amid the planned visit to the country of the UN special rapporteur on extrajudicial executions Agnes Callamard, who was invited by Malacañang to “see for herself” the conduct of the Duterte administration’s ruthless drug war.

Despite repeatedly issuing such threats, Mr. Duterte had vehemently denied ordering the execution of drug suspects and blamed the criminal syndicates of purging their own ranks.

He had locked horns with officials of the United States, European Union and the United Nations for such remarks, which his critics believed were a veiled sanction for the police to engage in extrajudicial killings.

The foul-mouthed former Davao City mayor had earned the adulation of his supporters by promising to eradicate the drug problem and criminality in the country within the first six months of his administration, a vow he had failed to keep as he asked for a six-month extension in carrying out his drug campaign.

Surveys show up to 80 percent of Filipinos support his antinarcotics campaign.

As in previous gatherings, the President spent much of his 50-minute speech giving litany regarding his administration’s campaign against illegal drugs and how difficult the task was.

“I will suppress drugs. I’m doing it and believe me, until the last pusher (is) out of the streets and (the) last drug lord is exterminated, it will last until the last day of my term. I will not back down,” he said.

“While I don’t want to sound conceited, if I did not become President, the truth about our problem with illegal drugs, which is really a virulent issue and activity, will not come out,” he added.

The drug problem, Mr. Duterte said, was much more difficult to handle than terrorism. “I would rather deal with terrorism because… it’s just violence for a moment,” he said.

The President said the validated list of policemen, mayors and other government officials involved in the illegal drug trade was about several inches thick.

Mr. Duterte had earlier identified former President Fidel Ramos, who also attended the event, as the source of his so-called “narcolist.”

He said the information given to him by Ramos, whom he described as his “No. 1 critic and No. 1 supporter,” prompted him to seek the presidency.

According to the President, he would present the list of public officials behind the narcotics business in the next meeting of the National Security Council.