‘Pinoy Aquaman’: Guardian of the seas 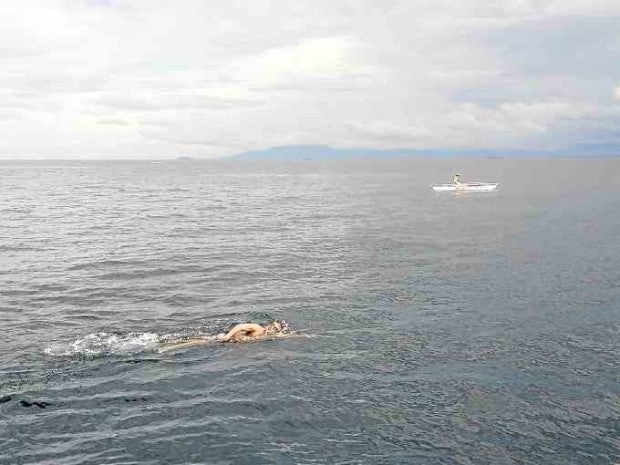 Lawyer Ingemar Macarine is the first man to cross the Canigao Channel. PHOTOS BY LEO UDTOHAN

UBAY,  Bohol—Fourteen-year-old Harold Bernales didn’t want to miss the chance to witness the attempt of lawyer Ingemar Macarine, also known as the “Pinoy Aquaman,” to cross the Canigao Channel on Sunday.

The 17-kilometer channel separates islands of Bohol and Leyte, and connects the Bohol Sea with the Camotes Sea.

“It was my chance to see him,” said Bernales, who had heard about Macarine’s feat on open sea swimming here and abroad. The lad joined his father, Paquito, who served as boatman to the escort boat of Macarine.

It was a successful swim despite the strong current. Macarine, 40, an election officer of Tubigon town in Bohol province, crossed the channel in more than six hours.

Caring for the seas

Mayor Constantino Reyes of Ubay town organized the event to raise public awareness about the need to promote clean seas and local tourism.

“I hope this swim will inspire our kababayanfrom Maasin City and from Bohol, and, of course, all over the Philippines to take care of our marine environment,” Macarine said. “I am promoting tourism in Ubay and for clean seas and beaches.” 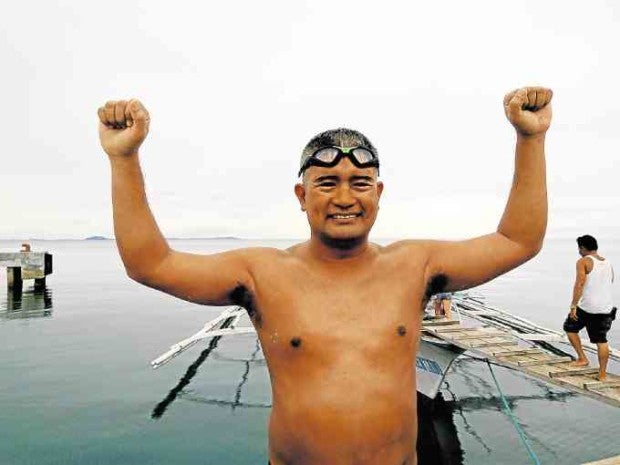 After applying sunblock lotion, Macarine took time to pray Psalm 23, known as the Psalm of David where God was described as a shepherd. He started to swim off Barangay Tugas in the island-municipality of President Carlos P. Garcia at 6:06 a.m. toward Maasin City, Southern Leyte, which is part of the Canigao Channel.

He reached Guadalupe Port in Maasin at 12:30 p.m., or after six hours and 37 minutes. He was met by residents who wanted to take their pictures with them.

Elizabeth Ibale, 66, said it was her first time to meet someone who could actually swim from Bohol to Leyte. “I admire his ability,” she said.

Macarine plans to return to the United Kingdom to swim the English Channel sometime in September next year. The event was cancelled in August due to bad weather.

“I hope to try again next year. So, this is actually part of my training,” he said. On Jan. 17, he will swim from Camiguin province to Balingoan town in neighboring Misamis Oriental province.

Macarine has conquered the seas in the United States and Philippines. He was acknowledged as the first Filipino to swim 2.7 km from Alcatraz Island Penitentiary to San Francisco in April 2014.

He was the first to conquer the Babuyan Channel, swimming for two hours from Palaui Island to mainland Sta. Ana in Cagayan province—a distance of 7.2 km—on June 15, 2014. Likewise, he was the first to swim from Santa Fe on Bantayan Island to San Remigio in mainland Cebu province, covering 19.99 km in seven hours and 45 minutes.

His attempt to swim from the Visayas to Mindanao, specifically from San Ricardo, Southern Leyte province, to Surigao City in Surigao del Norte province, in May 2014 was unsuccessful, but he made a personal record of doing 23 km in five hours and 30 minutes.

This year, Macarine was the first to cross from Sumilon Island to Punta Bilar (January), the Bohol Sea from Pamilacan Island to Poblacion, Baclayon (January), Subic Bay (March), Tañon Strait from Barangay Bulak to Apo Island (April), and the Cebu Strait (June).

The “Pinoy Aquaman” was chosen one of the three Heroes of the Environment in 2015 by World Wildlife Fund for Nature, along with the indigenous Taw’buid Mangyan of Mindoro (tamaraw conservation) and Gerlie Menchie Alpajora (fisheries). 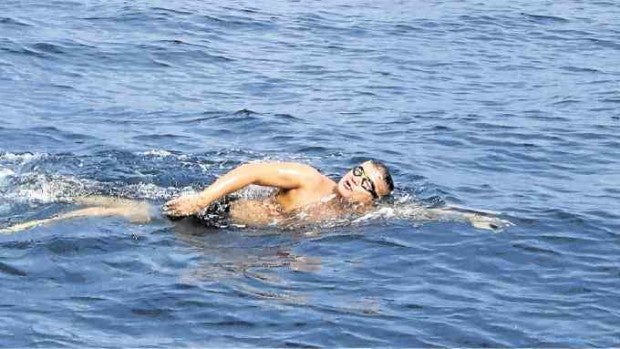