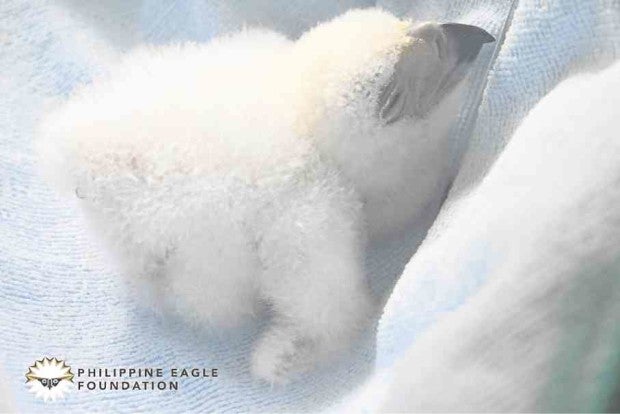 The still unnamed eaglet is now three weeks old, having broken out of its shell on Nov. 4.

The PEF said the eagle, the 28th hatched in captivity, measures 4 to 5 inches tall and weighs 488.3 grams.

“In the midst of continued mortality and persecution in the wild, this hatching success underscores the importance of conservation breeding as way of securing this species’ gene pool,” Dennis Salvador, PEF executive director, said in a statement.

“The chick showed no signs of deformities. It is active and in fact, has a big appetite,” said Colin Santander, PEF animal keeper.

The Philippine Eagle is considered an endangered species because of its rapidly declining population.

The International Union for the Conservation of Nature classifies the species as “critically endangered.”

In July 1995, then President Fidel Ramos declared the Philippine Eagle the national bird.

A pair of Philippine Eagles needs 7,000 to 13,000 hectares of rain forest to survive. However, deforestation continues to pose a serious threat to their population.

Only about 400 pairs of eagles are left in the wild.

The PEF, which depends heavily on donations for its projects, has been at the forefront of the campaign to save the eagles. —JOSELLE R. BADILLA