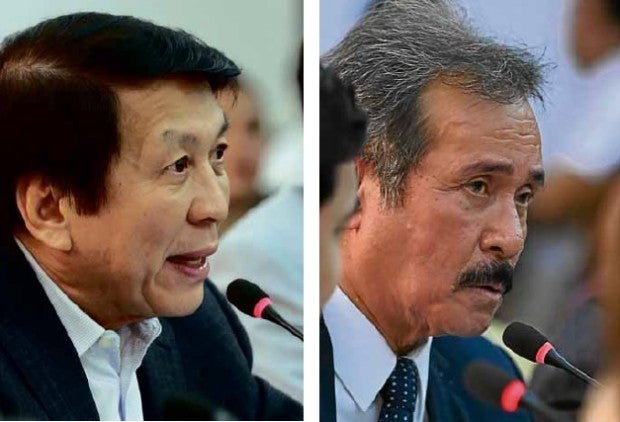 SEXUAL TONE House Majority Leader Rodolfo Fariñas (left) sets the tone for the hearing, asking Ronnie Dayan to describe how his love for Sen. Leila de Lima was. Later, Rep. Fredenil Castro (right), follows up with a question if the former driver bodyguard’s relationship with the senator was “true, pure and strong.” —NIÑO JESUS ORBETA

And most people thought then US presidential aspirant Donald Trump was being vulgar and sexist when he indulged in locker room talk in a private conversation with a broadcaster.

On Thursday, in the public hearing of the House of Representatives committee on justice, several congressmen similarly showed their prurient side when they focused on the salacious details of the love affair between Sen. Leila de Lima and her married bodyguard and driver, Ronnie Dayan, in their investigation of the alleged drug trade inside New Bilibid Prison.

Dayan, who went into hiding in August and was arrested in Ilocos Norte on Tuesday, had been described as the missing link that would allegedly tie De Lima to the drug trade in prison.

But House members instead dwelled on the seven-year affair between the senator and her driver, with Dayan indulging them in his affidavit with intimate details about the relationship, including how he reportedly slapped De Lima for dumping him.

Both De Lima and Dayan had denied links to the drug trade, with Dayan adding that he left De Lima’s employ in 2014, shortly after receiving alleged payoffs from confessed drug lord Kerwin Espinosa.

House Majority Leader Rodolfo Fariñas set the tone for the hearing when he asked Dayan to describe how strong their love for each other was.

It had weakened to “Signal No. 1,” Dayan admitted—to much laughter from the room,  prompting the House committee chair Rep. Reynaldo Umali, to ask that “proper decorum” be observed.

But Fariñas pursued his line of questioning and asked Dayan to describe the highest intensity of the affair.

“It reached Signal No. 5,” said the senator’s former driver and partner.

Deputy Majority Leader Fredenil Castro then followed it up with a line straight from telenovelas: Was his relationship with De Lima “true, pure and strong (wagas, dalisay at matatag)? ”  he asked Dayan, and if it were, why would he betray her at the hearing?

Because De Lima had betrayed him, Dayan replied, adding that “for the law and love of country, I can betray her.”

Following his colleagues’ sexually charged questions, 1-Ang Edukasyon Rep. Salvador Belaro asked Dayan:  “When did you climax … the intensity of your feelings for each other?” The crowd roared.

When Dayan’s daughter, Hannah Mae, said that De Lima’s name on her phone was “TL,” which stood for “Tita Lei,” Fariñas quipped that “TL” also meant “True Love” or tulo laway (drool-worthy),” which again drew laughter from the house.

Earlier, Parañaque City Rep. Gus Tambunting asked Dayan about the rumored sex video that featured him and De Lima.  “It’s not true that we had a sex video, I don’t recall that we took a video,” Dayan said, admitting however upon repeated questioning that “There might be.”

Later in the afternoon, Pangasinan Rep. Leopoldo Bataoil again asked about the alleged sex video, to which Dayan replied: “There is no truth to that, sir. If there’s any, it did not come from my cell phone.”

The licentious exchange drew the ire of netizens, who expressed disgust at the misogyny exhibited by the honorable members of the House.

Tweeted @meggyphonic: “That’s 1M of the people’s money for this stupid circus. @DOJPH why don’t you file REAL charges and stop this telenovela?”

Said @pavelvond on Twitter: “There’s nothing like a good old romance to steer the attention of a telenovela-crazed nation off the #MarcosBurial issue.”

Ifugao Rep. Teddy Baguilat, a member of the House committee on women, did not attend the hearing, but when told of what transpired yesterday, he said in a text message: “Precisely that’s the reason we are not keen on Congress pursuing this investigation. (B)ecause we are not focusing on discovering of truth but on the satisfaction of our baser instincts.” —WITH A REPORT FROM JULIE M. AURELIO