De Lima: No woman deserves to be betrayed by any man | Inquirer News

De Lima: No woman deserves to be betrayed by any man 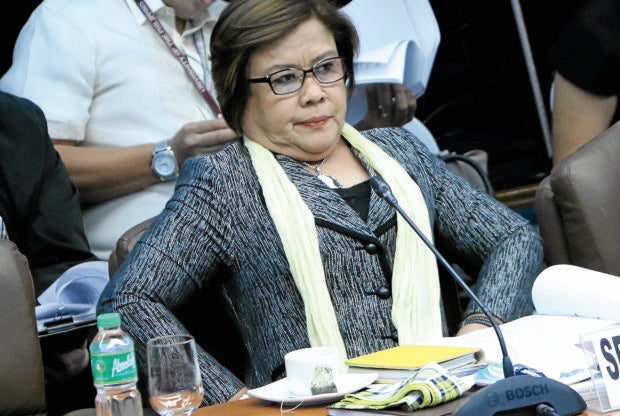 Senator Leila De Lima felt betrayed that her former partner, Ronnie Dayan, had turned against her.

De Lima said it broke her heart that her private life and personal relationship have become subjects of the public and Congress’ ridicule.

“No woman, whoever or whatever she may be, whether a sitting senator or a humble secretary, deserves to be betrayed, to be treated with so much disrespect and without dignity, before the public eye, by any man she is with or had a relationship with,” she said in a statement on Thursday night.

The senator was apparently referring to Dayan, who accused her of receiving money from suspected drug lord Kerwin Espinosa.

De Lima and Dayan, her former aide, admitted that they had an affair.

Dayan even recounted some details of their affair at the House of Representatives’ investigation into the alleged proliferation of illegal drugs at the New Bilibid Prison.

“It is a shame that those I trusted fell into the trap of power, deceit, fear and intimidation that they found it necessary to lie and twist truths to save themselves,” the senator said.

De Lima said she did not watch the entirety of her “public hanging,” referring to Dayan’s testimony in the House, but described the proceeding as a “spectacle that diverts us from more important national issues,” which she believes should have not included her.

“But soon, I will face my detractors,” she said.

The senator said the “glaring” inconsistencies of statements from so-called “witnesses” in the House inquiry also speak for itself.

“I refuse to indulge my accusers by addressing their web of lies and desperate attempts to implicate me as a corrupt public servant,” De Lima said.

She had repeatedly denied though receiving a single centavo from illegal drugs. TVJ