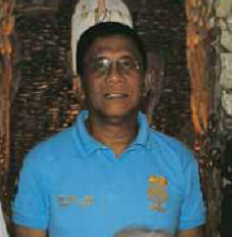 While Leyte officials applauded confessed drug trader Kerwin Espinosa for clearing their names, a police general was shocked by Espinosa’s claims that he had received drug protection money from the drug trafficker.

Chief Supt. Asher Dolina, who was police director for Eastern Visayas in 2015, maintained that he had not met Espinosa and didn’t know why the drug trafficker was linking him to the illegal drug trade.

He pointed out that he was police director for Eastern Visayas in 2015 when Espinosa was arrested for illegal possession of firearms.

The case, however, was dismissed due to a technicality.

“I have never met him. That was why I was surprised that my name was tagged as his alleged protector,” said Dolina.

Dolina said he never received money from Espinosa either in cash or cheque to purchase a sports utility vehicle (SUV).

“Why would I ask for an SUV when I had service vehicle of my own as the regional director,” he said.

He said he was glad that Espinosa claimed that he gave him checks because these could be traced through the bank records.

“I am thankful that he mentioned that he issued a check in my name. There would be a paper trail here if indeed I received money from him,” Dolina said.

He, however, admitted that he knew Victor Espina, the brother of former Philippine National Police Deputy Director Leonardo Espina, who was based in Ormoc City, Leyte.

Espinosa earlier claimed that he knew Dolina through Victor Espina.

But Dolina said the fact that Espinosa did not know his first name showed that he lied about him.

“He just referred to me as Dolina,” he said.

As Dolina struggled to clear his name, the Leyte officials who were earlier linked to the Espinosa Drug Group, felt relieved that their names were cleared by Espinosa during the Senate inquiry on Wednesday.

“I knew that the truth will come out and right from the start, the affidavit naming me as among their drug protectors was defective and not true,” the governor said.

Loreto said it was just a “matter of time for the truth to come out.”

“I am happy that I have been finally cleared of the issue. This has been a vindication of my name and we are glad that the truth has come out,” said Loreto, in a text message.

Vice Mayor Cari also said Espinosa’s statement only validated his earlier denial that he was never involved in the illegal drug trade.

“This vindication brings relief for me and my family and more than ever, validates my earlier statements that I have never been involved in any drug activity,” he said in a statement he posted in his “Facebook account.

Mayor Gomez said his name was dragged because of politics.

“We will never be involved in the drug trade. And what happened the past months were political handiworks by Albuera police chief, Jovie Espenido and the Codillas,” Gomez said.

Gomez claimed that Espenido has been close to the Codillas, a political family in Ormoc who ruled the city for decades.

“I am very,very innocent on this issue. I knew all along that the affidavit was defective. I am thankful that I was vindicated and cleared,” Veloso said.  SFM/rga