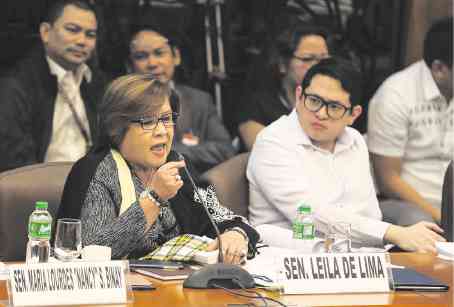 Given the chance to confront her accuser, she forgave him instead.

Asserting her innocence, Sen. Leila de Lima yesterday described as “a very nice script” the testimony given by confessed drug lord Kerwin Espinosa implicating her in his narcotics trade when she was justice secretary.

De Lima, tagged in the drug trade by no less than President Duterte in August, instead addressed her fellow senators and the public:

“I say this to you: I categorically, firmly, and absolutely deny having known Mr. Kerwin Espinosa. I do not remember any instance or occasion of having met him,” she said.

“I categorically, firmly, and absolutely deny having received any money, any cash from Mr. Kerwin Espinosa, either directly or indirectly through anyone else, in any occasion, at any time, whether that money is supposedly for either protection or fund-raising for campaign expenses.”

De Lima was given the first chance to question Espinosa after he named her and several other police officers as recipients of drug money from his illicit business.

“I actually have no intention to confront this resource person… even if I want to, because I think it would be a cross-examiner’s dream. But I feel that it would be pointless, useless, futile for me to do so given a very nice script, at least insofar as the portions of his testimony about me are concerned,” De Lima said.

She said Espinosa himself knew that his testimony—of giving her money, of meeting her in Baguio City to talk about the cash—was “a total fabrication.”

“To me, that portion of his testimony is under gunpoint, under duress. So it’s pointless for me to question him on those points,” De Lima told the Senate committee on public order and dangerous drugs.

The senator instead gave her fellow senators “free hand, full liberty” in asking questions to Espinosa.

Upon questioning by the committee chair, Sen. Panfilo Lacson, Espinosa said he was not coerced into executing his 27-page affidavit, in which he detailed how he began his drug trade and how he ended up overseas to flee the Duterte administration’s fierce campaign against drugs.

In the affidavit, Espinosa claimed he had first established links with De Lima sometime in August 2015, when the then justice secretary’s driver/bodyguard/lover Ronnie Dayan spoke to him about helping De Lima raise campaign funds.

He said he agreed to give Dayan an initial P2 million as “goodwill money,” and thereafter gave P700,000 a month. He said he also gave P1.7 million for De Lima through Dayan sometime in October 2015.

Vicente Loot, a retired top police official and now Daanbantayan mayor, denied Espinosa’s claim that he was a recipient of a P120,000 monthly payola from Espinosa, coursed through Chief Insp. Leo Laraga who led the police team that raided the cell of the slain mayor on Nov. 5.

“I will start with filing of charges against those who used my name in collecting drug money. This will now be the opportunity for me to clear my name,” Loot said in a statement.

Loot, 56, was among the five top police officials identified as illegal drug “protectors” by Mr. Duterte in July.

Loot repeatedly denied the accusations against him, saying there were people who just wanted to pin him down.

“I am a victim of influence-peddling by unscrupulous people. When a person has the rank, position, influence and credibility, his name is easily peddled and sold to law breakers by scalawags in the service or persons with personal interests,” he said.