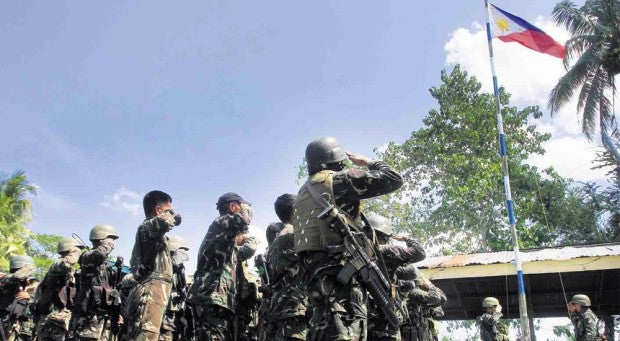 CAGAYAN DE ORO CITY – The New People’s Army (NPA) on Tuesday threatened to end the unilateral ceasefire it has declared in deference to the resumption of the peace process even as it accused the Armed Forces of the Philippines with sustained deployment of troops to the countryside.

The ceasefire, according to an NPA statement, is now in danger of being terminated unless the military stops deploying soldiers to the countryside.

Ka Allan Juanito, the NPA spokesperson for north-central Mindanao, said the deployment of government troops in rural areas has been a clear counter-insurgency move amid the peace process.

He said this has defeated the purpose of the cessation of hostilities.

With the continued deployment, the military now maintains presence in 78 barangays (villages) in 22 towns in Agusan del Sur and Agusan del Norte and Butuan City in the Caraga region; and in the Northern Mindanao provinces of Misamis Oriental and Bukidnon, as well as the cities of Gingoog, Malaybalay, and Valencia, according to Juanito.

He said that aside from soldiers, policemen have also been sent to rural areas.

Juanito said the military has entered more rural communities in the guise of delivering medical and dental services and conducting census to do surveillance. He said soldiers have also been questioning civilians, albeit illegally.

Capt. Joe Patrick Martinez, the spokesperson of the Army’s 4th Infantry Division, said soldiers have been stationed in some communities on the request of local government officials.

Caraga and Northern Mindanao regions are under the 4ID’s military jurisdiction.

Martinez said the Army would only enter an area if invited by local leaders. The military’s presence in a particular area, he said, was covered by a memorandums of agreement or understanding.

Martinez said the memorandums of agreement or understanding indicated the specific roles the military could perform, including helping implement infrastructure projects and address the socio-economic needs of the locals.

The military’s assistance, he added, would be beneficial to the local governments as it would mean savings in funds, which could then be used for other purposes.

“So far, we have not received any report of violations,” Martinez said, indicating that the troops have complied with the conditions in the memorandum.

He said the soldiers have been allowed to enter the communities to help residents since the military had the manpower, resources and the technical expertise to extend services needed by communities.

“Whatever we can help the people in the communities with, we will extend it,” Martinez said.

Martinez did not specify how many communities have so far asked the military’s help in the implementation of infrastructure programs or other concerns, but he said many of them were known to be conflict-stricken areas.  SFM