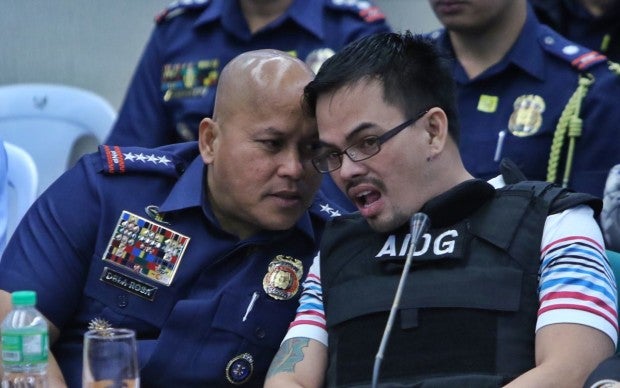 Kerwin Espinosa, reportedly the biggest drug lord in Eastern Visayas, revealed on Wednesday before the Senate his sources of drugs before he was arrested hiding as fugitive in Abu Dhabi in the Middle East last Oct. 17.

Reading his affidavit before the Senate committee on public order and dangerous drugs, Kerwin said his top sources of drugs were alleged drug lord Jeffrey “Jaguar” Diaz and a certain Lovely Adam Impal.

Espinosa claimed that he had been transacting with them since 2005 when he was still an underling of Diaz, tagged as the No. 1 drug lord of Central Visayas. Diaz was killed by policemen in a shootout in Las Piñas City, on June 17.

READ:  Kerwin Espinosa to give testimony in Senate probe on pa’s killing

The Senate committee is probing the death of Kerwin’s father Albuera Mayor Rolando Espinosa Sr. inside his cell during a police search at the Baybay Sub-provincial Jail last Nov. 5.

While inside the jail, Kerwin said he would ask his men, including a village councilor, to sell drugs he supplied from Impal.

While inside the jail, Kerwin said he would ask his men, including a village councilor, to sell drugs he supplied from Impal and Diaz.

The proceeds from Kerwin’s drug deals will then be delivered to Diaz through his brother Ryan while Impal receives her share in her bank account. The remaining collectibles will go to Kerwin.

He said he could produce up to P1.5 million in a single drug deal while being in detention.

He said Webb and other inmates had asked him to join the “Sputnik” Gang when they knew that Kerwin was a big-time drug dealer in Cebu.

Kerwin initially received four kilos of metamphetamine hydrochloride or “shabu” from Co until he started getting up to 10 kilos from the Chinese drug lord.

Kerwin and Co’s men outside Bilibid were the ones negotiating for their bosses. Kerwin even recalled a time the deal happened in the parking area of Metropolitan Hospital in Binondo, Manila.

He said they would hide the shabu packs inside spare tires, luggage, towels before transporting them inside their service vehicle, sometimes on the bus.