In the video, which circulated briefly on Facebook, Kantner pleaded with the Philippine and German governments to help raise his ransom.

The voice of Abu Sayyaf spokesperson Muammar Askali, also known as Abu Rami, could be heard in the background, ordering Kantner to speak.

“I need your help,” Kantner said. “From the Philippine government and German government to bring P500,000.”

But the bandits quickly corrected him, saying the ransom was P5 million.

Askali also asked the captive to write his name and address, saying, “We will give him a chance to contact his family, but we observed he is not giving us the correct details.”

He said Kantner earlier claimed he was Kantner Jurgen, who worked in Heizung Gaver.

“He said he was never kidnapped, and that he was not the person kidnapped in Somalia in 2008,” Askali said, referring to an earlier report by Agence France-Presse that said Kantner was kidnapped by Somali pirates in 2008. 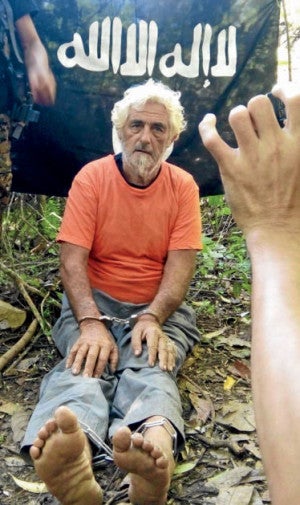 “We hate lying. If we found this German citizen lying to us, we will not have second thoughts about hurting him. We monitor online news,” Askali warned.

Addressing the German government, Askali said: “We hold your citizen captive and it is permitted in Islam to take his blood and life.”

The Abu Sayyaf said it would call local and foreign news organizations to announce the deadline for the ransom.

Kantner and his wife, Sabine Merz, were abducted on Nov. 5, when the Abu Sayyaf chanced upon them onboard their yacht, cruising the waters of Tanjong Luuk Pisuk in Sabah.

Askali earlier claimed they killed Merz when she tried to shoot them when they reached the waters of Tawi-Tawi.

On Nov. 6, villagers reported finding the body of a woman lying beside a shotgun on board a light blue yacht with the German flag off Laparan Island in Sulu, said Maj. Filemon Tan Jr. spokesperson for the Western Mindanao Command.

Tan said the body had gunshot wounds and bruises.

He said the passports of Kantner and Merz were found on the yacht. The picture in Merz’s passport appeared to match the dead woman, he said.