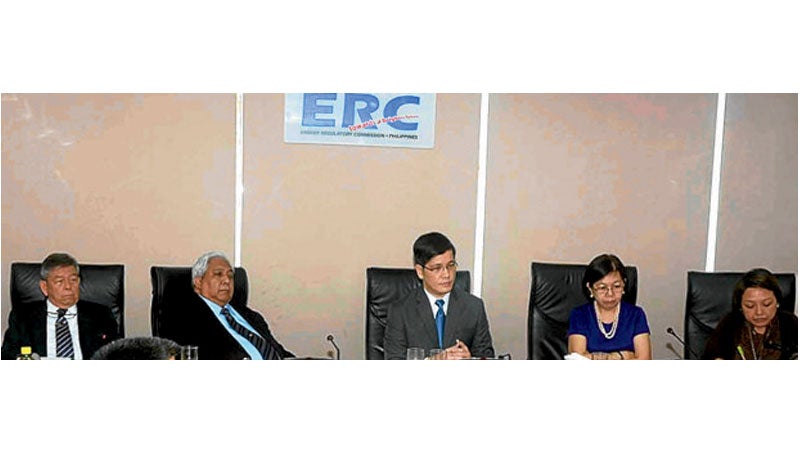 FACING PROBE Energy Regulatory Commission Chair Jose Vicente B. Salazar (center), shown in the agency’swebsite photowith Commissioners Geronimo D. Sta. Ana, Alfredo J. Non, Gloria Victoria C. Yap-Taruc and Josefina PatriciaM. Asirit, says only that he respected the President’s call for their resignation and that he would “definitely take the appropriate actions that would protect the organization.”

LIMA/MANILA—President Duterte on Sunday demanded the resignation of the entire Energy Regulatory Commission (ERC) in the wake of the suicide of an official of the agency allegedly under pressure to rig auctions of government contracts.

Some ERC commissioners, however, said they would not resign as such a move would not be in the best interest of the quasijudicial body.

ERC Director Francisco Villa Jr. committed suicide in his home on Nov. 9, leaving behind a series of suicide notes revealing corruption in the agency.

In one of the notes, Villa wrote: “My greatest fear in the bids and awards committee is the AVP by Luis Morelos which the chairman and CEO, Jose Vicente B. Salazar, chose through a rigged selection system. That will be a criminal act.”

Mr. Duterte learned about Villa’s suicide as he arrived in Lima, Peru, on Thursday night to attend the Asia-Pacific Economic Cooperation (Apec) forum.

On Saturday, Mr. Duterte warned the ERC officials to prepare themselves.

“My source was a document. Now it’s a matter of government lawyers assessing the case. They had better pray,” he said.

In Manila, ERC chief Salazar said he would ask for a meeting with Mr. Duterte to explain the situation in the ERC to him.

“I am confident that the proposed meeting with and briefing for the President would result in clearer directions from him regarding the issues facing the ERC,” Salazar said.

Salazar, who was appointed last year by then President Benigno Aquino III to a fixed seven-year term as head of the ERC, offered no direct response to Mr. Duterte’s demand that he and the commissioners resign, saying only that he respected the President’s statement and that he would “definitely take the appropriate actions that would protect the organization.”

Part of those actions is “a request to the Commission on Audit to immediately probe the allegations” of Villa and “our expression of support and full cooperation with the planned inquiry by the Senate committee on energy,” he said.

“Resignation would not be in the best interest of the ERC,” they said.

As of press time, Salazar had not stated categorically whether he would step down as demanded by Mr. Duterte.

The President ordered an investigation, though Malacañang could not say which agency would carry out the probe.

Energy Secretary Alfonso Cusi told the Inquirer on Monday that he had asked the National Bureau of Investigation to look into the circumstances that led Villa to take his own life. “We want to know what really happened,” Cusi said.

On Sunday, Mr. Duterte said he had received and read reports about the controversy that followed Villa’s death.

“I am demanding they all resign,” the President said, referring to all officials of the ERC and citing internal and intelligence reports indicating systemic corruption in the agency.

Villa’s sister, journalist Charie Villa, said the suicide notes showed that her brother had been under stifling pressure to approve procurement contracts without bidding or hire consultants as chair of the ERC’s bids and awards committee.

“They really abused the [system] … just like in the past,” Mr. Duterte told reporters.

The President appoints the members of the ERC, but he cannot suspend or remove them from office, as officials of the commission, which was created by law to regulate the country’s electric power industry, enjoy security of tenure.

ERC officials, however, may be removed from office for a just cause as specified by law.

Mr. Duterte said he would ask Congress to either “disband” or “reorganize” the ERC and to file charges against the erring officials.

“I leave it to the implementer. All these officials will have a choice: I will demand from Congress to disband the [ERC] or leave them without a budget, or file cases simultaneously,” Mr. Duterte said.

In Manila, Cusi said he would look at how Mr. Duterte’s order could be implemented, especially since the ERC was created by law and abolishing it or folding it into the Department of Energy would require an act of Congress.

A resolution has been filed in the House of Representatives seeking an investigation of the circumstances surrounding Villa’s death.

In House Resolution No. 565, Bagong Henerasyon Rep. Bernadette Herrera-Dy cited Villa’s suicide notes in which he indicated that he was under pressure to “approve contracts without proper bidding and adherence to procedure.”

She said Villa’s suicide had “far-reaching implications” on the ERC and that the inquiry was meant to “exact accountability and formulate remedial legislation in the name of transparency and integrity.”

In a statement issued on Monday, Villa’s sister thanked Mr. Duterte for his prompt response to the family’s cry for justice.

“We the family of Jun Villa are deeply and profoundly humbled and so grateful for the attention of President Duterte to shed light over our tragic loss,” Charie Villa said. “We thank the President for taking the first step toward reforms in the power industry which will benefit consumers and the economy.” —WITH REPORTS FROM DAXIM L. LUCAS AND VINCE F. NONATO IN MANILA