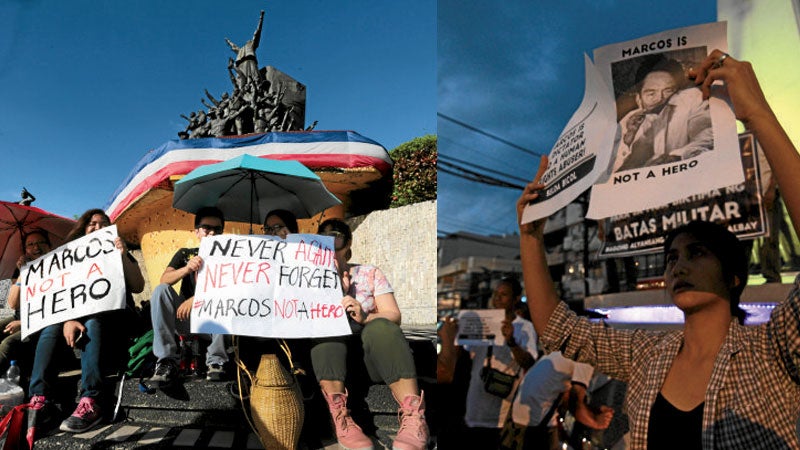 A broad protest movement is set to greet President Rodrigo Duterte on his return on Friday to show the people’s indignation over the furtive burial of the dictator Ferdinand Marcos at Libingan ng mga Bayani in Taguig City amid demands that the Supreme Court order an exhumation.

“We’re laying it on him because no matter how we look at it, the process started with his pronouncement that if he becomes President, he’s going to allow the burial,” Bonifacio Ilagan, convenor of the Campaign Against the Return of the Marcoses to Malacañang (Carmma), told the Inquirer on Sunday.

The President is currently in Lima, Peru, for the Asia-Pacific Economic Cooperation summit.

Ilagan said Marcos’ burial on Friday at Libingan was a direct affront to the victims of martial law and the activists who fought against the dictatorship.

“While we are personally affected, at the end of the day, we ponder on its implication to the present and the future, the next generation who will live under the impression that the Marcos regime could be honored like that,” said Ilagan, also the vice chair of a group of former political detainees.

National Union of People’s Lawyers (NUPL) secretary general Edre Olalia said his group will file their motion in the Supreme Court today to cite in contempt the Marcos family and officials of the Philippine Army and the Philippine National Police and that they be fined and imprisoned.

“The burial showed that the true colors and attitude of the Marcoses have not changed. They are so used to deceiving, lying to and abusing our country,” he said in a radio interview.

Olalia, who represents former Bayan Muna Representatives Satur Ocampo and Neri Colmenares in the petition against the burial, slammed the “premature execution” of the court’s Nov. 8 decision, which he said was not yet final.

Olalia said court rules allow them 15 days to appeal the decision. Since they received an official copy on Nov. 11, they supposedly have until Nov. 26 to file a motion for reconsideration.

But the Marcoses proceeded with the military interment rites on Nov. 18, sparking spontaneous protests.

Due to the turn of events, Olalia said the NUPL will not only ask the Supreme Court to overturn its decision allowing the burial but also order the exhumation “and probably even exorcism” of the dictator’s remains from Libingan.

Solicitor General Jose Calida said he did not think the court would grant the motion, noting the “landslide” 9-5-1 vote of the magistrates supporting Mr. Duterte’s directive to allow the burial at Libingan 23 years after the dictator’s body was returned to the Philippines.

Marcos died in exile in Hawaii three years after his ouster in the Edsa People Power Revolution in 1986. His body had been preserved at a mausoleum in his Batac hometown.

Calida said the court’s decision was deemed “immediately executory” and that there was “no legal basis” for the appeals or the contempt demands.

Ilagan said Carmma was touching base with all institutions, organizations and individuals who issued statements against the burial to make the protest encompassing.

The details are still being ironed out, although they are looking at Luneta Park in Manila and Ayala Avenue in Makati City, he said.

“We’re hoping the crowd will be really big and we want this to have a different atmosphere. We want this to be neutral, encompassing all sectors,” Ilagan said. “I suppose it’s going to be a whole day affair, there will be small rallies in various places then at some point we will all meet.”

Ilagan said Mr. Duterte’s partiality to the Marcos family created an environment favorable to the concept of a one-man rule.

“The implication of the burial is the revival of the Marcosian ideology, that we need one strong person to rule and he cannot be questioned because he has all the best intentions,” Ilagan said, agreeing that this was similar to Mr. Duterte’s leadership style.

Protests also are planned in the provinces next week.

“Definitely, there will be more and bigger protests against this insult against the people, especially those who suffered torture and kin of those who died or remain missing fighting the Marcos dictatorship,” said Reylan Vergara, secretary general of the human rights group, Panay Alliance Karapatan.

“We are inspired by the groundswell of protest especially with many of our youth at the forefront,” said Elias Guiloreza, chair of Samahan ng mga Ex-Detainees Laban sa Detensyon at Aresto in Panay.

“The youth were also at the forefront in protest against the rule of Marcos especially just before martial law was declared. Now our young people are again the most active in condemning his treacherous burial,” said Guiloreza, 65, a former student-activist who was tortured and detained for 19 months.

In Naga City, Ateneo de Naga University students livestreamed videos on social media of students walking out of the university right after the news of the late dictator’s burial broke out on Friday morning.

Students from University of Nueva Caceres, Universidad de Sta. Isabel, Bicol State College of Applied Science and Technology, and Naga College Foundation also joined the protest chanting that the late President was “never a hero then, never a hero now, and will never be a hero.”

They made their way to Plaza Quezon at the city center where they staged their demonstrations.

In Legazpi City, Albay province, Bicol University’s student council released a statement on social media calling on Bicolanos “to be relentless and vigilant.”

But hackers defaced its website early Sunday after the council called Marcos a “thief, a dictator, and worst of all, a murderer.”