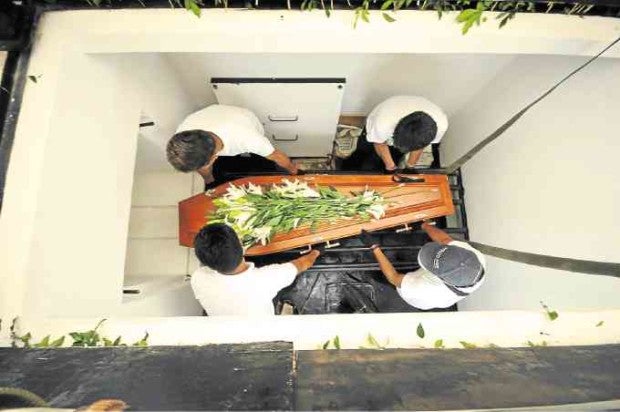 The Philippine Army will seek clearance from the family of dictator Ferdinand Marcos before processing any request to visit his tomb at the Libingan ng mga Bayani where his secret burial surprised the nation.

This was disclosed by a top Army officer on Saturday when asked by the Inquirer for permission to visit the tomb inside the gated cemetery near the Army headquarters in Fort Bonifacio.

“There is a coordinator from the Marcoses who gives the clearance for this,” said the officer, who requested anonymity. “The guidance given to the Army Support Command is to first inform the Marcoses who will then make a decision on whether to allow [the visit] or not.”

Vice President Leni Robredo denounced the clandestine preparations for the dictator’s burial on Friday, saying such a move was like that of “a thief in the night.” Protests, mostly by students, erupted in major cities around the country against both the dictator’s family and President Duterte, who allowed the burial to fulfill an election campaign promise to the Marcoses.

On Saturday morning, a journalist who wasn’t allowed to enter the Libingan, said he saw about 70 buses from Ilocos Norte filled with Marcos supporters wearing red T-shirts entering the cemetery, which is guarded by Army soldiers.

The Army provides security for the 103-hectare Libingan, the former Republic Memorial Cemetery established as a tribute to Filipinos who fought gallantly for freedom and democracy. It is under the administration of the Military Shrines Services of the Philippine Veterans Affairs Office, a bureau under the Department of National Defense created by Presidential Proclamation No. 208 issued by Marcos himself on May 28, 1967.

Those buried at the Libingan include military personnel who died in the line of duty or were honorably discharged, veterans, former presidents, government dignitaries, statesmen and national artists.

The same Marcos decree also allows the cremated remains of spouses of former Philippine presidents, secretaries of national defense and chiefs of staff of the Armed Forces of the Philippines to be interred in the same plot where they are buried, as in the case of President Macapagal’s widow, Evangelina.

“Which means Imelda Marcos may be interred in the plot allotted to her husband when she dies,” another military source said.

Edre Olalia, president of the National Union of People’s Lawyers (NUPL), criticized the “arbitrary or discriminatory” nature of the restrictions on entry to the Libingan, saying it should remain open to the general public.

“Especially as media, you are entitled to cover something that affects public interest, and there should be no prior restraint,” Olalia said after learning that journalists and other visitors were prevented from entering the cemetery. “How about those who want to visit other tombs?”

“Let them make a fool of themselves as modern-day guardia civil,” he said, likening the Libingan authorities to the repressive Spanish colonial era law enforcers.

The NUPL, a human rights lawyers’ group, represented the Campaign Against the Return of the Marcoses to Malacañang and others in their Supreme Court petition against Marcos’ burial at the Libingan. —WITH A REPORT FROM VINCE F. NONATO/rga