With rock music and piñatas, S. Koreans rally against Park 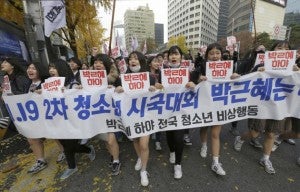 South Korean high school students march during a rally calling for South Korean President Park Geun-hye to step down in Seoul, South Korea, Saturday, Nov. 19, 2016. For the fourth straight weekend, masses of South Koreans were expected to descend on major avenues in downtown Seoul demanding an end to the presidency of Park, who prosecutors plan to question soon over an explosive political scandal. The letters read “Park Geun-hye should step down.” —AHN YOUNG-JOON/AP

SEOUL, South Korea — South Korea is seeing its biggest wave of street demonstrations in decades, but gone are the raised fists, flying rocks and police water cannons that had symbolized the intensity of the country’s protest culture.

For the tens of thousands of people who filled a major avenue in downtown Seoul for the fourth straight Saturday, demanding the resignation of scandal-ridden President Park Geun-hye has become a form of family entertainment. That means rock music, comedy, open mics and pinata bashing.

“My kids are having fun … they just love these plastic horns,” said Hong Seon-ok, who sat on a mattress with her three daughters, the oldest of them 10. “I definitely wanted to come out and show my daughters we can accomplish something by protesting.”

Police said about 170,000 people turned out for the latest anti-Park protest in streets near City Hall and a boulevard fronting an old palace gate, where a week earlier, hundreds of thousands marched in what may have been the largest protest in the country since it freed itself from dictatorship three decades ago. Protest organizers sized Saturday’s crowd at 600,000.

The rally came as state prosecutors prepared to question Park over suspicions that she allowed a secretive confidante to manipulate power from the shadows and amass an illicit fortune, a scandal that critics say undermines the country’s democracy.

On Sunday, prosecutors plan to indict the confidante, Choi Soon-sil, and two presidential aides who allegedly helped her interfere with state affairs and bully companies into giving tens of millions of dollars to foundations she controlled.

The protests continue to draw people from all ages and regions, including many families with children.

People swayed to the music of the rock band Deulgukhwa, which played in front of a massive video screen on a temporary stage that has become the center of the rallies.

Earlier Saturday, children threw bean bags at a Park pinata, which burst open to reveal a Choi pinata. Popping out from the smaller pinata was a Barbie doll on a stuffed horse, meant to be Choi’s daughter, an equestrian athlete who allegedly got a virtual free pass into an elite university because of her family’s presidential ties. Nearby, actors impersonating Choi and Park encouraged protesters to mock them.

“Satire, not anger, is the strongest form of expression,” said Lim Ok-sang, an artist who created the pinata.

For teenagers stuck in South Korea’s hyper-competitive school environment, the allegations surrounding Choi’s daughter, Yoora Chung, 20, seemed to be their biggest source of anger. In South Korea, graduating from elite universities is seen as important in career and even marriage prospects.

“We invest blood and sweat into our studies to get into a good school, and it’s disheartening to see how everything was so easy for Chung,” said Moon Jeong-ju, a high school student who took an eight-hour bus ride from the southern city of Suncheon to participate in the rally.

On Friday, South Korea’s Education Ministry said it demanded that Ewha Womans University cancel the admission of Chung after it found that the school had manipulated its admissions process to accept her.

Emboldened by the huge protests in recent weeks, opposition parties have been stepping up pressure to force Park to quit.

On Thursday, they used their parliamentary majority to pass a law that would allow for a special prosecutor to independently investigate the scandal and potentially expose the president’s wrongdoings.

There is a growing voice within the opposition that an impeachment attempt is inevitable because it’s unlikely Park will resign and give up her immunity from prosecution.