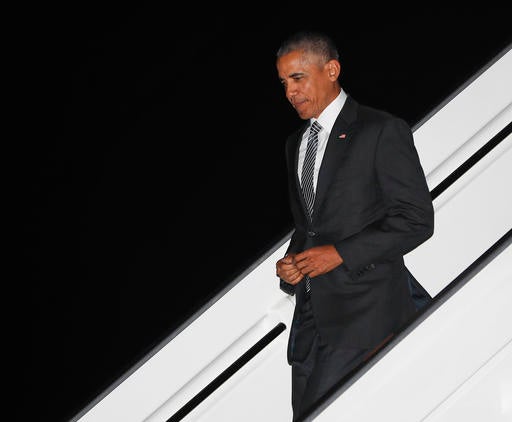 Obama landed at Lima’s Jorge Chavez International Airport ahead of an Asia-Pacific Economic Cooperation (Apec) summit that is likely to focus heavily on Trump’s shock victory.

On Saturday, Obama will meet leaders of the 12-country trans-Pacific trade agreement, which Trump has opposed and now faces an uncertain future.

White House officials admit the chances of passing the so-called Trans-Pacific Partnership, or TPP, are slim, but Obama will urge leaders to give the new president time to formulate policy.

From Obama down, officials have stressed that US economic and strategic interests have not changed as a result of the election, and Trump may yet recalibrate his views.

“It’s only been 10 days since the election,” said US Trade Representative Michael Froman.

“Any new administration needs time to go through the transition process, appoint its people, get briefed up on the state of current policy and to make their decisions about where they want to go from here.”

Froman warned of “serious” strategic and economic costs if the United States walks away from the deal, designed to be a cornerstone of US influence in the Asia-Pacific region.

But already allies are turning their attention to a rival Chinese-backed free trade agreement.

Japanese leader Shinzo Abe, who took domestic political risks to back the US trade deal, visited Trump in New York on Thursday to hear from the president-elect himself.

Trump has sparked concern in Tokyo and Seoul in particular by questioning decades-old mutual defense obligations that underpin their security.

“It is manifestly in the United States’ interests for these alliances to endure and to be a source of confidence to our partners and for them to understand that they don’t need to come out from under the US umbrella,” she said.

While stressing that she did not want to speak for or speculate about Trump’s foreign policy, she sought to reassure key US allies in NATO and the Pacific Rim that they will not be abandoned.

“The weight of this office, and the weight of American global leadership, and the responsibilities that it entails, and the history that we share, the interests that endure, make it reasonable for our allies and partners to expect that the United States will uphold its obligations,” she said.

Wendy Cutler, a former US trade negotiator now with the Asia Society think-tank said Asia-Pacific leaders “will use the meetings to find out as much as they can about the possible economic, political and strategic policies to be pursued in the next administration and what this will mean for them.”

“I expect that President Obama will ask his colleagues to give the next administration ample time to shape its agenda,” she added.

While many Pacific nations are clamoring for deeper trade ties with the rest of the world, in the United States and throughout the West there is growing opposition to deals that many believe have contributed to jobs being sent overseas.

Obama is likely to make the case that globalization is a fact of life, and modern trade deals — with sturdy environmental and labor provisions — help shape that trend in the right direction.

Obama is also slated to hold talks with Chinese President Xi Jinping on Saturday for a final meeting between the leaders of the world’s two economic powers.

US officials say the sit-down will also deal with efforts to stop North Korea’s ballistic missile and nuclear programs.

Obama is expected to press for an increase in the pace and severity of sanctions against North Korea, which is trying to develop a miniaturized nuclear warhead and a missile capable of delivering that deadly payload to the United States.

Beijing has long dragged its heels on sanctioning its allies in Pyongyang, fearing a flood of refugees if North Korea’s economy collapses.

But earlier this year, Beijing moved to sanction a conglomerate based in China’s frontier city of Dandong that had an estimated $530 million in trade with North Korea between 2011 and 2015.