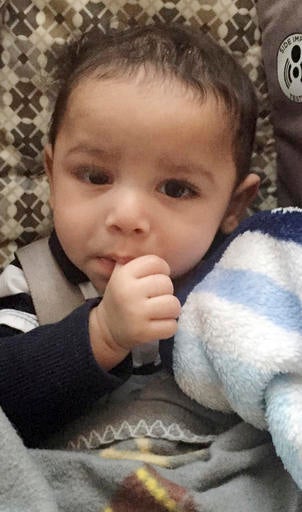 This undated file photo released by the Laramie County, Wyo., Sheriff’s Office shows Silas Anthony Ojeda of Cheyenne, Wyo. Divers unsuccessfully searched a pond Wednesday, Nov. 16, 2016, on the outskirts of Cheyenne for the body of the missing 13-month old boy, authorities said. Logan Hunter Rogers, 23, of Cheyenne, faces charges involuntary manslaughter and child endangering with a controlled substance in the death of the boy in Cheyenne. AP

CHEYENNE, Wyo.  — A Wyoming man pleaded guilty Friday to involuntary manslaughter in the death of an infant whose disappearance prompted an unsuccessful search of a northern Colorado landfill this month for his remains.

Authorities still haven’t found the body of 13-month-old Silas Ojeda, who was reported missing late last month by his grandfather. Divers searched a pond on Wednesday on the outskirts of Cheyenne but found nothing.

Logan Rogers, 23, entered his plea Friday in district court in Cheyenne. He faces up to 20 years in prison at a later sentencing.

Prosecutors have agreed to drop a second charge alleging Rogers endangered Silas by exposing him to methamphetamine before his death on Oct. 20.

Rogers was the boyfriend of Ojeda’s mother, Rhiannon Ojeda, according to law enforcement statements filed in court.

Rogers told Judge Thomas Campbell that Rhiannon Ojeda was present at their Cheyenne home when Silas fell off a counter. Rogers said he bathed Silas after he fell but said the boy had a seizure.

Under questioning of his defense lawyer, Brandon Booth, Rogers responded “yes” when asked whether he or anyone else in the home was using methamphetamine at the time Silas fell.

Rogers said he performed CPR on Silas for an hour but said it wasn’t successful. Campbell didn’t question Rogers about what he did with Silas’ body.

According to a detective’s statement filed in court, Rogers has told investigators that he had put Silas’ body in a trash container at a local community college.

Trash from the container goes to a landfill near Ault, Colorado. Authorities searched for Ojeda’s body at the landfill for more than a week before halting the effort late last week.

Booth told Campbell that prosecutors have been keeping him informed about developments in the investigation. Booth said he believes there are two or three other people who will have an interest in “saving their skin” as the case unfolds. Even though a body has not been found, Booth said evidence could develop that would pre-empt Rogers’ ability to argue that he was guilty only of manslaughter.

Campbell told Rogers that Booth was describing the trade-off that Rogers was making by pleading guilty without going to trial. “They’re not going to, now or later, charge you with murder or some other, greater offense,” the judge said of prosecutors.